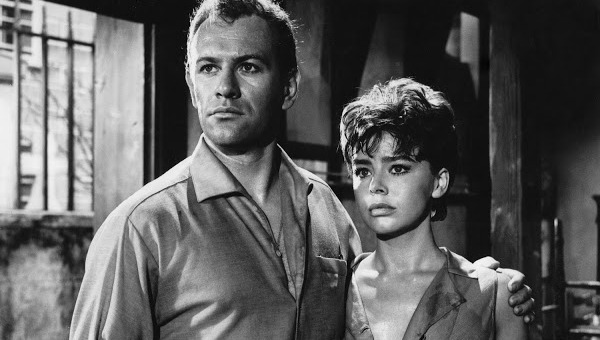 Science fiction is a notoriously tricky genre in which to age gracefully. Sincere attempts to depict the future have a fair chance of being openly mocked within a few short years, while plots that deal in visitors from outer space or tampering with the laws of nature tend to be reflections of present day concerns, often being overtaken by events in the real world, leaving them as half-forgotten relics of a bygone age. But a select few, through skill or luck, seem to become only more relevant down the years, defying their age as they continue to deliver their messages since audiences first laid eyes and ears on them.

THE DAY THE EARTH CAUGHT FIRE (unconnected to Robert Wise’s similarly groundbreaking THE DAY THE EARTH STOOD STILL, released ten years prior to Val Guest’s effort) is an outstanding example of just such a film. Its craftily sensationalist title disguises an intelligent, intimate and beautifully executed story about the prospect of the human race accidentally, but deservedly, signing its own death warrant. Some parts may have aged less well than others, but any film that explored man-made climate change (admittedly to an extreme degree) and realistically painted the prospect of planet-wide extinction almost a year before the Cuban Missile Crisis was clearly thinking ahead.

Beginning at the end (in every sense), in a sweltering and deserted London, reporter Peter Stenning (Edward Judd) stumbles back to his newspaper’s office to write what may well be his final submission. In flashback we learn that peculiar weather events have begun to pop up around the globe. Stenning and colleague Bill Maguire (Leo McKern) together work out what the Met Office is refusing to acknowledge: that the Earth’s orbit has shifted due to near simultaneous atomic bomb tests, which have resulted in a drastically altered global climate and consigned the planet to an untimely demise as it veers towards the sun.

Originally intended to be shot several years earlier, Guest struggled to get the film off the ground. Yet the delay turned out to be fortuitous; audiences had moved on from the previous decade’s fixation with monster movies and science gone bad, and so had cinema. Building on the British tradition of earthy, downbeat science fiction, exemplified by the likes of Nigel Kneale’s Quatermass films (the first two of which Guest directed for Hammer in the 50s), FIRE plays it real from beginning to end. Shot in psuedo-documentary fashion using real locations around London, including the Daily Express offices on Fleet Street, the film has a very different feel from its predecessors – a sense of time and place that has let it mature over the years.

Guest’s crisp, unfussy direction allows the story to unfold in a very matter of fact way. The scenes inside the newspaper offices have a ring of authenticity that few films have captured before or since, as we witness what would now be called a breaking news story; while the witty, rapid-fire dialogue injects an urgency in to the conversations between characters, chiefly Stenning and Maguire (the latter having taken the former under his wing following a spate of problems in his personal life) and Stenning’s romantic liaison with spiky Met Office administrator Jeannie (Janet Munro).

The result breathed new life into a familiar doomsday scenario. Crucially, it had the good fortune to ride the British New Wave. It isn’t hard to see the influences: Edward Judd’s alcoholic and divorced journalist wears sunglasses, a crumpled suit, frequently dangles a cigarette from the side of his mouth and appears headed towards boozy self-destruction. FIRE is also emotionally downbeat, features swearing, casual sex and broken marriages, and still manages to squeeze in an appropriately steamy romance between Judd and Munro. It feels a world away from the reassuringly safe family values espoused by Hollywood only a few years before.

The film certainly looks to the past for some of its inspiration. Wartime rationing was still a very real memory for most Londoners, and the sight of tight restrictions on water and the evacuation of children to the countryside would have had plenty of potency. But the brief appearance by Michael Caine as a policeman towards the end almost serves as a totem, pointing the way to the reinvigorated cinema of the Sixties, of which Caine would become a poster boy. The climactic scenes of anarchy breaking out amongst London’s youth foreshadow the rise of the decade’s counterculture and protest movements. Maguire’s cynicism at the government’s role in causing the crisis, and its subsequent denials of responsibility, also feels forward-thinking.

Yet it is the highly topical issue of the freedom of the press versus a government intent on keeping its secrets locked up that makes FIRE feel bang up to date. Is Jeannie an Edward Snowden for her age, spilling the ultimate cover-up to her new boyfriend – that the Earth is doomed and it is the fault of the people in power? She is sacked and arrested for her troubles, though she is freed soon after and immediately offered a job by the newspaper that published the story – a rare example of a conscientious press.

The eerie scenes of London as the temperature soars – the Thames drying up, roads melting, heat mists rising, services grinding to a halt – are memorably uncomfortable; the black and white photography switching to stifling orange for the bookends. But it is the ingenious conclusion that lingers longest. As the world attempts to correct the planet’s orbit, two editions of the paper are ready to go to print. One’s headline proclaims ‘World Saved’, the other ‘World Doomed’. Guest leaves us guessing as to which one ultimately goes to press, and it’s a sad reflection on the planet’s current climate that either headline may yet be needed for a future edition. THE DAY THE EARTH CAUGHT FIRE is a landmark in the annals of British science fiction, and its prominence in the BFI’s forthcoming Sci-Fi: Days of Fear and Wonder season is testament to its lasting power.