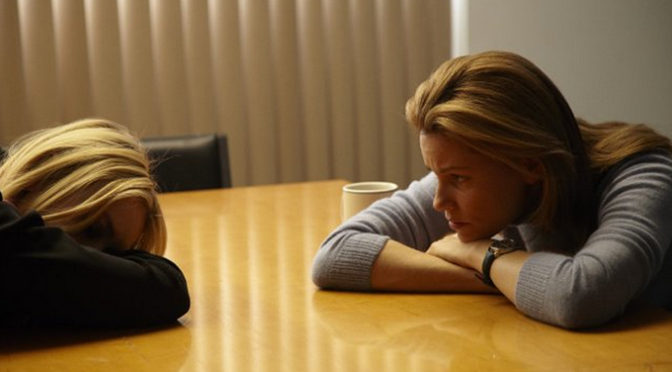 Following on from her powerful 2012 documentary WEST OF MEMPHIS, Amy Berg turns her hand to a narrative feature that – on paper – could be an impactful piece. EVERY SECRET THING is the tale of two young woman convicted of abducting and killing a baby as children. Although adeptly acted and featuring a good handling of tone by Berg, she occupies a position of too much observation and not enough visual expression, even if the film’s core narrative is engaging.

Using flashbacks to illuminate background, the story follows the work of Detective Nancy Porter (Elizabeth Banks), as she tries to find a missing 3-year-old, only two weeks after the release of two convicted child murderers back into the community: Alice (Danielle Macdonald) and Ronnie (Dakota Fanning). Whether they are responsible for this new incident is the question, as well as what genuinely happened when they abducted a child as 11-year-olds, and during their subsequent incarceration.

The standout element of EVERY SECRET THING is the performances of the leads. Danielle Macdonald in particular as the creepily naïve-sounding Alice, the impenetrable girl with the penetrating stare still allowing the passive aggressive moments to hint at unresolved issues with her demanding mother (Diane Lane). Dakota Fanning delivers an effectively understated performance as the troubled Ronnie, and Elizabeth Banks also reminds us she is genuinely decent actress when not hamming it up in ridiculous wigs around Panem.

The standout element of EVERY SECRET THING is the performances of the leads. Danielle Macdonald in particular as the creepily naïve-sounding Alice…

The handling of the film’s narrative is patient when it comes to pacing, but the imagery alongside and attempts to flesh out the wider community are undeniably limp. On the plus side, just enough information is teased out as the story progresses to hint at future plot beats without revealing the finer character-motivational details. There are, however, many sidesteps that feel superfluous – Nancy’s exasperated boyfriend; the mother of the original victim visiting the current one – without adding much insight.

On an expressive front, the documentary-like camerawork doesn’t add as much the story could afford, or perhaps needs. Although the observational standpoint avoids passing judgment on the central characters and gives an ambiguity crucial to the narrative, the slightly plain direction leaves the imagery unremarkable for a story that is crying out for some visual flair (not unlike the similar story of the far bigger budget PRISONERS, an overlong affair lifted by the cinematography of Roger Deakins).

On an expressive front, the documentary-like camerawork doesn’t add as much the story could afford, or perhaps needs.

However, the film has the confidence to stick with saying little when it need not. The dynamic between Diane Lane’s mother Manning and Alice is particularly intriguing. Hinting (even if rather unsubtly at times) at the transferral of maternal affection to the less fortunate Ronnie, and Alice’s desperate leaps for attention, where the root blame lies is left fuzzily defined. Whilst this brings about unflattering thematic echoes to Lynne Ramsay’s fantastic WE NEED TO TALK ABOUT KEVIN, it makes the film more layered than it otherwise would be.

Although lacking in visual expression to add to the story, Berg’s film benefits from her handling of both pace and the actors at her command. With undertones of ineffective parenting as well as problems with America’s justice system (a theme common to WEST OF MEMPHIS), there is plenty to commend this effort even if the all the secrets of narrative cinema aren’t quite unlocked.