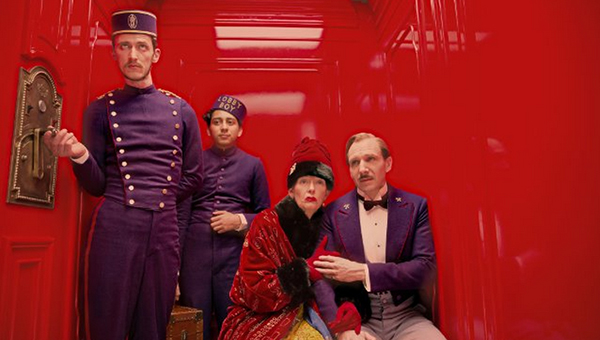 THE GRAND BUDAPEST HOTEL, packed with engaging performances and a kinetic central story, continues a hot streak for Wes Anderson that began in 2012 with MOONRISE KINGDOM, and places him as one of the most accomplished American voices in contemporary cinema.

At the gravitational centre of the story are concierge M. Gustave (Ralph Fiennes) and his young apprentice Zero (Tony Revolori). The events follow Gustave’s inheritance of the Renaissance artwork ‘Boy With Apple’ from an aging client of the hotel, Madame D (Tilda Swinton); and his subsequent stitching up for her murder. The elderly Zero (F. Murray Abraham) recounts the tale to Jude Law, who plays the young version of unnamed ‘Author’.

THE GRAND BUDAPEST HOTEL is a delightful chocolate box of a film. Playing out just short of farce, with his trademark symmetry and elaborate precision, it is the cinematic equivalent of some ornate curio from a shop in Prague. As the story springs from one delicious absurdity to another, the guiding hand of Anderson can be felt – a sort of shaggy-dog tale where the dog has, in fact, been impeccably groomed.

Taking place in the fictional country of Zubrowka, Anderson’s setting is a fantasy central Europe, mixing in elements of just about any country that can claim a place on the banks of the Danube. It’s hard not to believe there is a bit of self-reference going on when a character declares Gustave to have “sustained the illusion with a marvellous grace”.

It’s hard not to believe there is a bit of self-reference going on when a character declares Gustave to have “sustained the illusion with a marvellous grace”.

Like many of Anderson’s films, THE GRAND BUDAPEST HOTEL takes great joy in the film making process itself. Extensive use of elaborate miniatures is notable, as well as jumping between aspect ratios reflecting the period in question (Academy ratio for the 30s, widescreen for the 60s and 1.85:1 for the 80s). Even when miniatures are not used, Anderson’s lens focus often apes their appearance on film.

Fiennes’s superb Gustave is the dominant figure – always surprising with his gentile promiscuity and sudden lurches into profanity – and a bewildering array of supporting characters are, across the board, superbly realised. Chief amongst them is Adrien Brody, clearly revelling in his role as Dmitri, Madame D’s venomous son, striding around in dark trenchcoats or silken dressing gowns and a hairstyle befitting the villain of the piece.

Although the film bounces around with glee, that isn’t to say Anderson’s storytelling doesn’t have some melancholia underneath all the fandangle. The escalation towards war in the backdrop allows mourning of the civility in which Gustave attempts to live and to impose upon on those around him.

Although the film bounces around with glee, that isn’t to say Anderson’s wonderful storytelling doesn’t have some melancholia underneath all the fandangle.

There is a definite sadness that the march of time and destructive geopolitical forces can render the admirable parts of history mere footnotes, scarcely remembered like the hotel of the title. In this respect, the largely peripheral Russian-doll narrative architecture with Tom Wilkinson’s older version of ‘the Author’ in the 1980s is more significant than at first glance. The only way to retain the positives of faded societies is to tell their stories and celebrate their works. Nostalgia has underpinned several of Anderson’s features, but THE GRAND BUDAPEST HOTEL is mournful of the loss of more civil times, rather than wallowing in nostalgia.

In terms of emotional authenticity, 2012’s MOONRISE KINGDOM still stands tall – but with THE GRAND BUDAPEST HOTEL, Anderson may be entering his most profound creative streak. His desire to show fantastic worlds and tell stories in the face of the inevitable march of time and destructive forces is at the core of the film. Anderson’s films are beginning to show the soul beneath the exactitude.

3 thoughts on “The Grand Budapest Hotel”