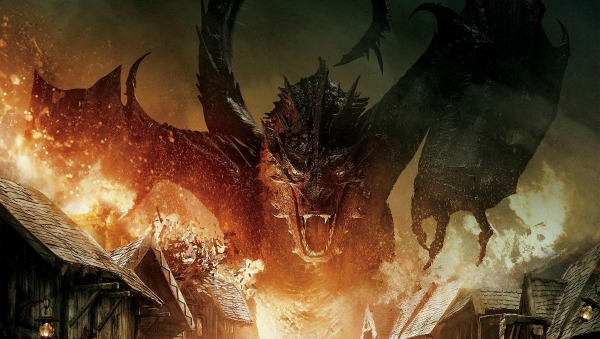 In American Football they have an excellent saying – it’s called “Suck For Duck”. Due to the way the American Football League (NFL) is set up, rather than being relegated, the lowest rank teams gain the first picks of the next year’s new crop of players –  the potential stars of the future. This can create an odd situation where losing matches and being low in the table might actually be beneficial. In fact, some teams actually aim to lose, and are cheered by their fans for doing so.  Failing – and wasting no time about it – becomes the best thing. Normally this happens around two thirds of the way through a season, when a team is on the rack and has worked out they aren’t going to win any awards.The light has gone out of everyone’s eyes and the group just happily slide into failure. The team “Sucks For Duck”. I don’t know what happened behind THE BATTLE OF THE FIVE ARMIES (BOTFA), but it feels like Peter Jackson and co. has created the pure “Suck For Duck” movie.

BOTFA begins exactly where DESOLATION OF SMAUG left off. Smaug (Benedict Cumberbatch) smashes down onto Laketown, setting everything ablaze. Only Bard (Luke Evans) can stand in the dragon’s way. Meanwhile, back at the Lonely Mountain, the dwarves and Bilbo (Martin Freeman) search high and low for the Arkenstone at the command of an increasingly deranged Thorin (Richard Armitage). And as if that wasn’t enough, a big army of orcs are descending on them from all angles. Guess what, they do some fighting.

The problems with the previous two HOBBIT films has always been the discontinuity between their subject and their visuals. So much of the story for Peter Jackson’s THE HOBBIT is based in THE LORD OF THE RINGS. Sauron returns (as do many of the actors) and the reason for the trip to The Lonely Mountain is based around setting up the events of THE LORD OF THE RINGS films which we have all already seen. Fine. But a problem arises when THE HOBBIT visually looks completely different to THE LORD OF THE RINGS films into which they are intended to narratively lead. How are we meant to believe that Thorin beating Azog is important and centrally connected to events that happen with Frodo and Aragorn, when Thorin and Azog look physically  like they are from a completely different universe to Frodo and Aragorn and obey totally different rules of physics? Ask yourself, as nice as the barrel chase of DESOLATION OF SMAUG may be, would it fit within the LORD OF THE RINGS trilogy? The answer is no. And this creates an important disconnect in our mind between what the story is saying and what we are seeing. What’s amazing about BOFTA is that this is the least of its problems.

Where do we begin? Terrible dialogue, terrible characters, ludicrous fight scenes (even by THE HOBBIT’s standards), and a very poorly structured narrative, it all feels a lot closer to TRANSFORMERS than Middle Earth. In fact, if this film carried anyone other than Peter Jackson’s name, it would be being flaunted as an example of the bloated and soulless Blockbuster culture. And this is the thing – it doesn’t feel like Peter Jackson’s work!

So much of BOFTA lacks the refreshing sense of originality Jackson normally brings. Lots of scenes are directly pinched from elsewhere. A giant dirt worm creating tunnels, Legolas slow-mo running over a crumbling tower blocks, the ghostly Nine teleporting back and forth in a fight, they are all visually drawn from 300 and THE MATRIX, and every vague action fantasy in between . There are even a number of pinched lines – “think of the children” and “winter is coming” being the worst – and it is hard to discern if these are knowing, lazy, lazily knowing or knowingly lazy.

So this is why I say “suck for duck”. It honestly feels like a production where the team sat down and said “how is the easiest and quickest way we can do this and get out of here”. To which someone at the back said, “I know, lets just take bits from other films and throw it at a screen. I hear thats what George Lucas does”. Nods rippled the room. They sucked for duck.

I doubt this is what actually happened. But if it isn’t that may be even sadder. Thirteen years ago, THE FELLOWSHIP OF THE RING came out and smashed the movie world apart with its originality. Then THE TWO TOWERS virtually created the techniques motion capture with Gollum. RETURN OF THE KING, for all its problems, created some of the most incredible CGI effects of the period, which have gone on to be used in big-budget cinema across the land. And here we are now, at the end of a bloated series of films, regurgitating the base level of acceptable cinema with utterly no originality. It’s over.

2 thoughts on “The Hobbit: The Battle Of The Five Armies”