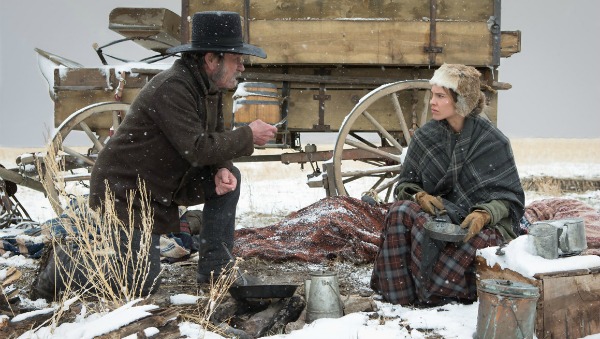 THE HOMESMAN is an odd-couple Western with the emphasis on the odd. It is shockingly matter-of-fact in its treatment of the downside of frontier life for women in 1850s Nebraska – madness, infanticide, suicide and self-harm. But the harsh realities of life in the Territories are made bearable by a wonderful performance by Hilary Swank, who lights up the screen with her gritty goodness.

When she teams up with old rascal George Briggs (Tommy Lee Jones), we get some dry humour, but this odd-couple relationship does not follow the usual Hollywood template. About half-way through, first-time director and co-writer Jones sends us not so much a curveball, as a wicked bouncer. In keeping with the film’s stoic tone, it is not dwelt on, but it changes everything.

Based on the novel by Glendon Swarthout, THE HOMESMAN’s title refers to the task of taking immigrants back home – a job typically done by a man. When local church minister (John Lithgow) tells his congregation that three women, who have been driven mad, need escorting back home to Iowa, Mary Bee Cuddy (Swank) volunteers to take them. As the reverend tells her, ‘you’re as good a man as any hereabouts’. Miss Cuddy is a frustrated spinster whose marriage proposals to two different men are rejected because she is too ‘plain’ and ‘bossy.’ Swank, who won an Oscar for portraying a man in BOYS DON’T CRY, is no stranger to non-feminine roles. Her single farmer is a strong, self-sufficient woman, full of compassion and yearning. Her dress and severe centre-parting bring to mind a portrait of the poet Emily Dickinson.

‘three crazy women for five weeks is more than I bargained for.’

Miss Cuddy misses the music and trees of her native New York and has to make do with an embroidered piano keyboard, which she fingers while she sings. We first see George Briggs when he emerges from a bombed house. Face blackened and wearing old-timey long-john underwear with a detachable bum-flap, he provides some much-needed light relief. The chalk-and-cheese couple meet when Cuddy saves him from a hanging, on condition that he agrees to help her in return for payment. ‘I can see why you’re single,’ says Briggs, ‘three crazy women for five weeks is more than I bargained for.’

Swank and Jones have a nicely understated onscreen chemistry. Her attempts to civilise him fall on stony ground. ‘This might be the finest, most serious act of your life’, she tells him. ‘It might be 300 dollars,’ he replies. She names her mules Redemption and Grace. What does Briggs call his horse? ‘Brown.’ Both leads have fascinating faces and it is a treat to be able to gaze at them and at the big skies of Nebraska. Jones’s craggy lined face reminds us of the High Sierras of conventional Westerns. THE HOMESMAN is more properly a Mid-Western: the landscape is flat, empty and often full of driving snow, with not a cactus in sight.

After days without food, the wagon arrives at a blue hotel, the only building in Fairfield. It feels like we have wandered into the opulence of The Grand Budapest Hotel. There are cakes galore and a roast pig with an apple in its mouth. But its Irish dandy owner (James Spader) turns them away: ‘the milk of human kindness be damned.’ In one of the film’s most memorable scenes Briggs takes fiery revenge (and the pig).

At the end, the white picket fences and neat gardens of Iowa come as a shock after the wildness of Nebraska. The final scene is straight out of Huck Finn, with Briggs dancing a jig to a banjo on a ferry across the river, under the stars.