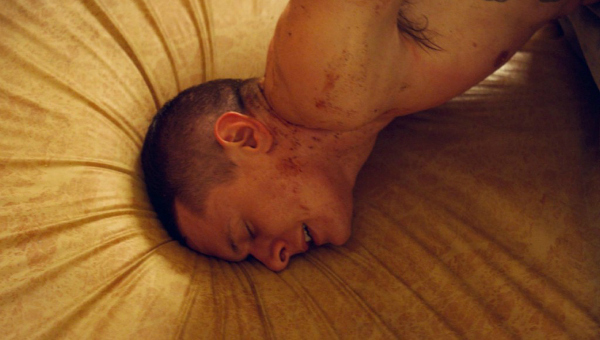 Led from the front by an astonishingly aggressive performance from Jack O’Connell, STARRED UP gives the British prison film exactly what it needs: a kick up the arse.

A gripping look at life behind bars in a UK prison, as well as an examination of a father-son relationship on life support, David Mackenzie’s film is a welcome reminder of what British cinema can accomplish when it has something vital to say. Even though the script eventually succumbs to stock characters and contrivance, STARRED UP offers a disturbing portrayal of criminals who are all too used to being forgotten on both sides of the fence.

Young offender Eric Love (O’Connell) arrives at an adult prison having  been ejected from a youth offenders’ institution where he was ‘starred up’: identified as a troublemaker and transferred early. It doesn’t take long for him to antagonise the locals in his new home. The guards are quick to clamp down after he ‘introduces’ himself to his next-door neighbour, while the other inmates are immediately mistrustful of Eric’s willingness to test the authority of Spencer (Peter Ferdinando), on whose patch Eric has washed up. The only ones looking out for Eric are his father Neville (Ben Mendelsohn), a long-term resident of the very same prison, and Oliver (Rupert Friend), a volunteer therapist who runs a group for inmates trying to turn their lives around. Eric isn’t particularly interested in either of them.

Mackenzie captures an indelible sense of the barely-repressed aggression and simmering tensions contained within the whitewashed walls.

It’s a given that any half-serious attempt at depicting life behind bars is going to be tough viewing, even before the violence starts. Mackenzie captures an indelible sense of the barely-repressed aggression and simmering tensions contained within the whitewashed walls. It feels raw and nervy, and the lead performances turn the heat up even further. O’Connell’s Eric won’t easily be forgotten: full of vim and with a grudge against anyone who stands in his way, he is a frightening portrait of a man who grew up without a father figure in his life. Mendelsohn’s Neville is also a strong character, who knows little about his son and tries too late to help him grow up.

Doing a better job of trying to reach Eric is Oliver, who initially seems like he’ll be eaten alive by the new arrival. Slowly, however, his patience and persistence pays dividends; and this sub-plot injects a welcome shot of humanity into a rather inhumane environment. Rupert Friend gives a touching performance as Oliver, but it’s a shame his character isn’t explored as much as it deserves; and by the end the film focuses exclusively on the father-son relationship. It’s here that the film’s credibility is stretched almost to breaking point: in an attempt to provide some catharsis around the unresolved issues between Eric and Neville, plot logic takes a back seat, and a predictably violent climax ensues. Jonathan Asser’s script also falls back on a few stock characters – sadistic wardens, profiteering ring leaders, idiotic muscle-men – but this is the only other weakness in what is a remarkably assured piece of work.