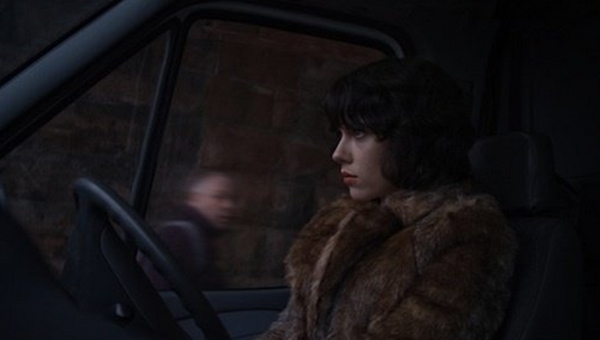 Jonathan Glazer’s curious, disquieting and perplexing piece of guerilla surrealism, UNDER THE SKIN, has largely proven worth the 10-year wait … and it most certainly gets inside your head.

Scarlett Johansson takes on the mostly-mute role of an other-worldly visitor who has taken on the form of a woman, in order to prey upon gullible Glaswegian men who she entices into her Transit van and back to her lair. The film charts her stalking around Scotland for sustenance, followed by a mysterious bike-riding overseer.

UNDER THE SKIN is – from the opening shots – a film based on atmosphere. The kaleidoscopically disorientating visuals and soundtrack used in an ‘emergence’ scene are particularly unsettling. Much has been said of the effectiveness of juxtaposing Hollywood A-lister Johansson against passing ‘proles’ to create an ‘alien’ feeling: but this observation is more than a little patronising and does a disservice to the actual form and craft displayed by Glazer – not to mention Mica Levi’s soundtrack and Johansson’s performance.

Glazer’s film is at its most potent when it escapes the confines of the van.

Although the soundtrack maintains a disturbing beauty to it, and there is dark humour to the scenes where Johansson makes stilted conversation with men to try and gauge their worthiness as prey, Glazer’s film is at its most potent when it escapes the confines of the van. The film’s entire construction is observational and even voyeuristic. Often getting up close to examine the minutiae of the scene, lingering on Johansson’s vacant stare – that of bewildered observation – or the optimistic naiveté of her prey, the camera just as often seems comfortable loitering at a distance, from a more towering viewpoint. There is also something subversively unsettling about watching a beautiful woman coldly and detachedly assess men, on criteria that we can only guess at.

By placing us in this role, we mimic Johansson’s observation of ‘us’ within the film. The behavior is curious and bewildering.  This is further emphasised in Glazer’s depiction of Scotland itself, especially when the narrative decamps to the Highlands. Although the residents of Glasgow, especially a snaking mass of Celtic fans, prove as unfathomable to Johansson’s alien as any other Scot, it is Glazer’s depiction of the Scottish landscape that feels alien.

…observing the snowy dust whipped up below him, we have a beautiful sense of desolation; as though we really are at the edge of the earth.

Through howling gales and blizzards, sodden forests and mud, it is not the tartan-tat romantic depiction so often encountered on film. As the ‘minder’ stands at the edge of a summit, observing the snowy dust whipped up below him, we have a beautiful sense of desolation; as though we really are at the edge of the earth. These scenes contain the best imagery in the film, with the score backing up a feeling of emotional atonality in this harsh outcrop of civilisation.

Although the odd scene risks ludicrousness (Johansson observing Tommy Cooper like some dumbfounded pet), the impact of Glazer’s stylised approach and Levi’s hair-raising soundtrack make the film burrow inside your skull. At the point where some sort of understanding or empathy is perhaps reached, the rug is pulled forcefully from beneath both us and Johansson. Narratively, just as we think we have the film figured out – with a fairly standard ‘going native’ trajectory – a shocking finale reveals that as hard as Johansson’s alien tries, she will never find the chords to create a harmony with her alien environment.

Our thanks to the Cameo Cinema in Edinburgh for enabling Jim’s review!

3 thoughts on “Under The Skin”