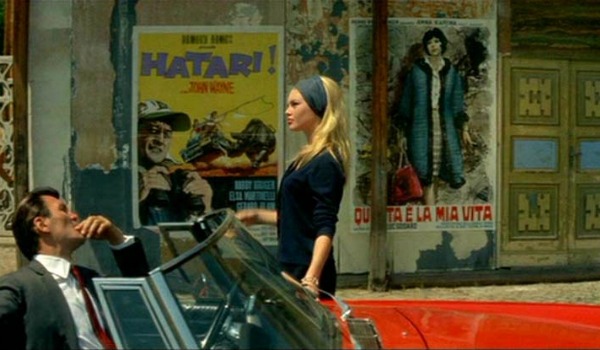 “Not just sex, but more. More!”  Boomed out by the American producer Jerry (Jack Palance), these words characterise the film that he wants the French playwright Paul (Michel Piccoli) to make in the film-within-a-film that is Godard’s 1963 cult classic CONTEMPT (LE MÉPRIS).  To anglophone audiences, French films, like French lovers, have always enjoyed a bipolar reputation for being as sexy as they are smart, satisfying cravings, not just for sex, but for more, more…  However unfounded these clichés are of the country’s nationwide produce, the French exports that provoke the biggest buzz abroad do tend to play to these twofold national stereotypes, from Abdellatif Kechiche’s super passionate yet sensitively explored lesbian love story in BLUE IS THE WARMEST COLOUR to Gaspar Noé’s über-explicit yet equally experimental LOVE most recently.  For a French director whose films have traditionally lent almost exclusively towards the smart rather than sexy half of the equation, CONTEMPT is a rare example of Godard commingling both.  But this meta-film, in many ways a film about its own production process, provides the clues to why he never tries this again.

Godard is notorious for making his audiences feel stupid and CONTEMPT, riddled as it is with esoteric references and impenetrable characters, does a particularly good job at this. On the surface, it’s a film about national stereotypes, which the protagonists’ vocation as filmmakers and the backdrop of a film set almost force us to read as clichés of national cinema styles.  Based on the novel ‘A Ghost at Noon’ by Italian writer Alberto Moravia, Palance makes a hyperbolic appearance as a dim-witted, commercially obsessed American producer, whilst great veteran director Fritz Lang (playing himself) charms – or chafes – us as a hyperwitty arthouse filmmaker.  Theirs is the first of the film’s contemptuous relationships, which stems from their failure to see eye to eye during the filmic remaking of The Odyssey.  On viewing a rough cut of the film, Jerry barks at Lang, “You cheated me, Fritz!  That’s not what was in the script!”  With Jerry envisaging a kitch blockbuster and Lang an art film, their relationship naturally degenerates.

…an outcome that seems to be written into the film’s own tragic meta-text.

Parallel to their strife, we witness the film’s most potent source of contempt: the buckling marital relationship between Paul and his beautiful wife Camille (played by global sex icon of the time, Brigitte Bardot, at the height of her stardom).  Typecast as the beauty and the brains of the French national stereotype, this couple epitomises the “sex” plus “more” that Jerry is after.  In his search for this supposedly fail-proof French formula, Jerry turns to Paul to rewrite Lang’s script, but as the yankee dollar enters the equation, everything starts to fall apart.  Should the brains prostitute the beauty for money?  What if without this money, it will be difficult for the beauty to subsist at all?  This very dilemma accosted Godard during the filming of CONTEMPT.  On viewing the rough cut, the film’s real-life American producer, Joseph E. Levine, accused Godard of cheating him by eschewing the much anticipated nude scenes of Bardot, and subsequently forced him to shoot and belatedly shoe-horn them into the film.  Contempt in this film comes from people, both on and off screen, feeling they’ve been treated like puppets, and contributes to the puppet-like performances.

But there’s something unnervingly un-Godardian about all this.  Perhaps CONTEMPT is really more nuanced than it at first appears.  Far from despising American filmmakers, we know that Godard and his fellow New Wave directors were avid consumers, admirers and influencees of mainstream auteurs like Howard Hawks and Hitchcock.  Even in the scenes that send up the corrupt American producer, we sometimes glimpse, subtly written into the set of CONTEMPT, the film posters from such iconic directors which pay homage to these American greats.  Godard was also a forerunner of progressive gender representations in cinema that deviated from dazzling us with racy blondes and the most eligible of gents.  When compared with his gender bending cult hit BREATHLESS, made just three years earlier and starring Jean Seberg as the smart, independent and androgynous love interest of the hopelessly romantic and perennially topless male lead, Jean-Paul Belmondo, CONTEMPT’s seeming return to a scantily-clad bimbo might strike us as a giant leap backwards.  But, inspired perhaps by Hawks’ portrayal of a subversively witty Monroe in the playfully titled GENTLEMEN PREFER BLONDES (1953), Godard is probably being doubly clever here, playing with the cinematic conventions that were thrust upon him, but refusing to play the game.

Contempt in this film comes from people, both on and off screen…

Godard’s first attempt at a big-budget, big-star film shot in CinemaScope and Technicolor, a decisive shift from his from his edgy, monochrome New Wave films, this was also his last.  CONTEMPT flopped when it first hit screens worldwide in 1963, an outcome that seems to be written into the film’s own tragic meta-text.  If the characters on-screen reflect only too faithfully the tumultuous relations between the filmmakers off-screen, this filmic experiment serves to prove that such a clash of interests is heading for a (literal) on-screen car crash.  Although critics and audiences alike viewed CONTEMPT as a betrayal at the time of its release, it has since been restored, re-watched and reconsidered as a deeply significant and tragically under-esteemed film in Godard’s cinematic trajectory.  Having dipped his toe in mainstream waters, this film can help us understand why Godard dived right back into making the iconoclastic films that he’s still producing today.

And if Godard succeeds in making you feel dumb, if the recondite quotation at the start of CONTEMPT about the meaning of cinema starts to make you twitch, just remember that it’s actually misattributed to André Bazin when its true source is Michel Mourlet.  For a film that pokes so much fun at the American producer’s misquoting, it seems that… oh, wait a second, nice try Godard!  So we may never fully understand CONTEMPT and will inevitably fall into the director’s many booby traps, but as what might just be the most meta film ever made and as the inspiration for some of cinema’s most memorable and most referenced scenes, it’s definitely worth a watch – and a good head scratch.