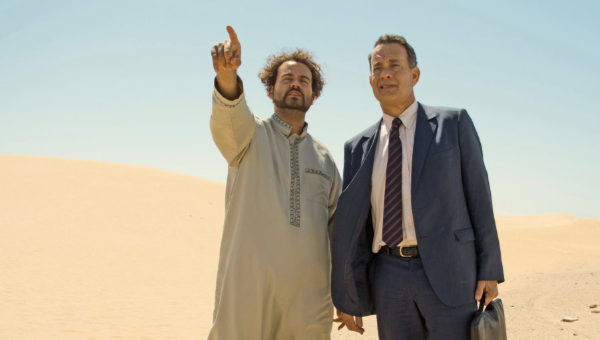 Tom Tykwer’s Saudi-set drama has plenty of resonance for anyone who has visited the Middle East in a professional capacity. There are plenty of elements – presumably drawn from Dave Egger’s book – that ring true. Although this saves the film from too much bland mediocrity, A HOLOGRAM FOR THE KING lacks substance, despite the always-engaging Tom Hanks.

Hanks plays Alan Clay, an IT salesman sent to Saudi Arabia to close a deal – seemingly sanctioned by the King – quickly and efficiently on the basis of his connections to the royal family. When he arrives, he finds his team working in a poorly air-conditioned tent in a city that is no more physical than a puff of shisha smoke. Unable to find anyone official to deal with, let alone the King himself, he concentrates on forging connections with a Saudi doctor (Sarita Choudhury), a Danish worker (Sidse Babett Knudsen) and his driver Yousef (Alexander Black). All the time, he ponders his past decisions over his daughter, soon-to-be-ex-wife, and failed efforts at an American bike manufacturer – and worries about a (heavy-handedly symbolic) growth that has appeared on his back.

There are three strands floating around in A HOLOGRAM FOR THE KING, none of which are fully and satisfactorily tied down.

There are three strands floating around in A HOLOGRAM FOR THE KING, none of which are fully and satisfactorily tied down. There’s an underlying element of economic commentary, with a portrayal of Clay’s previous life as director of a company which outsourced manufacturing to China and promptly died as a result. Another scene showing migrant workers on a Saudi building site appears to try and make a comment on the appalling conditions workers in the GCC are often subjected to, but the moment is fleeting and signals an abrupt shift in tone. If the film is trying to comment on the human cost of globalised labour markets, it gives it short shrift.

More prominent are the strands on the culture clash between Clay and his Arabic hosts, and the mid-life crisis he seems to have underpinning all of this. The more fruitful of these is the cultural disconnect Clay experiences, all while finding common ground with Yousef, his driver, and Zahra, the Saudi doctor with whom he forms a romantic connection.

Having Hanks’ character exchange emails with his love interest is also ill-advised as it begins to feel a bit like YOU’VE GOT MAIL (INSHALLAH).

The heavy echoes of Sofia Coppola’s superb LOST IN TRANSLATION cause problems. Because the script seems (perhaps in deference to the book, which I have not read) unwilling to go the less satisfying route, it does often feel like a poor man’s version of that – LOST IN TRANSLATION (FROM ARABIC), perhaps – and those common themes feel malnourished. The rather cliched plot device of someone finding themselves in a foreign land is also prominent, and it’s hard to shake the feeling that a female character would get rather more flack in a gender-reversed version (for example: EAT, PRAY, LOVE. The reaction to such stories often seems to be men ‘find’ themselves in these tales, and women indulge themselves).

Having Hanks’ character exchange emails with his love interest during a montage is also ill-advised as it begins to feel a bit like YOU’VE GOT MAIL (INSHALLAH). The film limps to a conclusion – which incongruously resembles SPLASH – having abandoned its most effective elements in trying to tie a knot in Clay’s mid-life crisis. The cultural clash elements are so accurately addressed that it’s a shame that they are abandoned in favour of a story which seems more generic and less satisfying.

The engaging presences of Tom Hanks and Choudhury mean the film doesn’t peter out completely, but by going down a dry, humourless “we’re-all-the-same-really-kiss-me-quick” route, A HOLOGRAM FOR THE KING arguably ends up a facsimile of superior films. Or a faint hologram even.