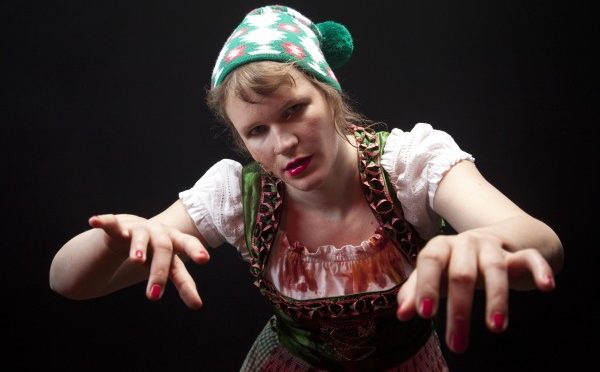 The key to any film attracting an audience is marketing, and for many horror films the title becomes a key part of that marketing.

Think of the likes of I BOUGHT A VAMPIRE MOTORCYCLE, ATTACK OF THE KILLER TOMATOES or HOLLYWOOD CHAINSAW HOOKERS and you know exactly what you’re in for when you take your seat. It’s also fair to say that you could sling together a collection of random words and come up with a cool sounding concept, but that doesn’t necessarily make for an interesting movie. ATTACK OF THE LEDERHOSEN ZOMBIES sounds trashy, cheap and lots of fun, and thankfully does a reasonable job of delivering on that premise.

The film certainly doesn’t waste any time in setting up its premise. We’re introduced immediately to a scientist who’s attempting to counteract the threat of global warming by inventing a machine that will produce snow all year round. It does so using a luminous green goo to stimulate the process, and when their financier inadvertently ingests some of the mixture, it sets in motion the chain of events that will turn a whole mountain of people (and more than a few deer) into creatures of the undead.

Zombie aficionados will likely be more satisfied by the traditional, Romero-esque zombies…

Into this mix come two cocky young snowboarders on a video shoot. Steve and Josh (Laurie Calvert and Oscar Dyekjaer Giese) are attempting to secure a big sponsorship, which Steve torpedoes in spectacular fashion. This leaves the two of them seeking refuge when their lift home abandons them, along with Steve’s girlfriend and business partner Branka (Gabriela Marcinkovà). They are forced to team up with bar owner Rita (Margarete Tiesel) when the scale of the zombie threat becomes fully apparent, and from them on it’s every man, woman and deer for themselves.

ATTACK OF THE LEDERHOSEN ZOMBIES is director Dominik Hartl’s first foray into the world of horror, but he’s clearly a fan of the genre. His is a third generation zombie movie, with clear influences from likes of Edgar Wright’s SHAUN OF THE DEAD and Peter Jackson’s BRAINDEAD and they in turn showing a line of descent back to George Romero’s NIGHT OF THE LIVING DEAD and others. Romero brought social commentary and his use of zombies to put a twist on Richard Matheson’s I AM LEGEND was simply a story facilitator, while the likes of Wright and Jackson have successfully mixed comedy with pathos and a tremendous variety of splatter effects.

This isn’t quite the rom-zom-com of Wright, with the relationship aspects more incidental to the narrative, but Hartl does share Wright’s sense of a good set piece. Nor is it quite the all-out crimson gorefest that Jackson would have made, but there’s still an impressive amount of zombie carnage on screen, with one character in particular becoming a recurring joke through the second half of the film. Consequently, it feels a less significant film than any of those predecessors, but it never feels as if it has aspirations to be their equal; simply to provide similar moments of joy in its undead rampage through the snow.

On those terms it’s undoubtedly a success, kept tight by a short running time and Hartl’s snappy direction. The acting is perfunctory and some of the comedy and zombie deaths obvious, but there’s enough spirit and splatter on show for you to forget about that. Zombie aficionados will also likely be more satisfied by the traditional, Romero-esque zombies on offer rather than the rapid rabid attacks that have become more commonplace in the last decade. ATTACK OF THE LEDERHOSEN ZOMBIES’ only real failing is that it features a whole host of zombies and a fair amount of lederhosen, but the intersect of their Venn diagram is marginal; surely a forgivable fault for an entertaining night with a mountain of zombies?