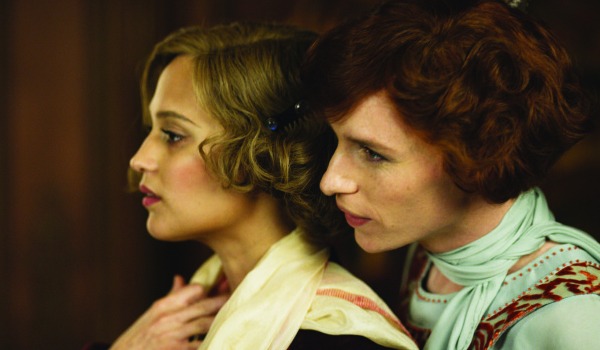 Despite the trailblazing transgender presence in TV, from Laverne Cox in ORANGE IS THE NEW BLACK to Rebecca Root in BOY MEETS GIRL, mainstream cinema still seems to be trailing behind. The latest reunion of Eddie Redmayne with LES MISERABLES director Tom Hooper, THE DANISH GIRL is one of the most high-profile treatments of a transgender subject to date. But its ground-breaking potential has just about been overshadowed by the controversy it’s sparked for casting a cisgender male lead in the role of a transgender pioneer. Although it’s been in the works since the publication of David Ebershoff’s novel of the same name in 2000, is this poetic film, in the wake of a string of more daring transgender portrayals in other media streams, simply too little too late?

A year after his Oscar-winning performance in THE THEORY OF EVERYTHING, Eddie Redmayne is back and brilliant as ever in what must be one of cinema’s most challenging roles, playing the pioneering Danish transgender artist, Lili Elbe (né Einar Wegener), who was one of the first to undergo a surgical sex change a century ago. But this biographic drama is as much about Lili as it is about Einar’s ever-loving wife, the lesser known artist Gerda (Alicia Vikander), who first has the idea for her husband to don a dress as a stand-in for her portrait of a ballerina friend. A gallerist advises Gerda that she could achieve greatness if she only found the right subject matter, and this new subject, Lili, embodies just that. Yet the subject matter of Hooper’s film extends beyond transgender considerations into gender politics in general through the figure of Gerda. Like lots of women still today, Gerda wants career success, a baby and to keep the husband she loves. And like so many women, she blames herself when her dedication to the former, in her eyes, breeds this “other woman”, a woman she comes home to find sitting on her sofa and who seems to be stealing her husband away. The emotions this film evokes may be as unique as its plot. Our heart goes out to Einar as he struggles, at first, with his transition into Lili, but so much more so to Gerda as she grapples with Lili’s annulling of her role as happy wife, and precluding her own so deeply longed-for transition into happy mother.

Following THE DANISH GIRL, we can no doubt expect a growing number of transgender renderings on the silver screen …

Depending on the film poster you see, either Lili or Gerda’s face might be in the foreground. This is not, primarily, a film about a sex change; it’s a film about two bicentral women and a universal story of love and loss. Anyone who’s ever loved someone and had to come to terms with their transmutation into a person they no longer recognise (or were they always that person?) will identify with the character of Gerda, as THE DANISH GIRL brings new meaning to the age-old mantra “love is blind”. There’s a beautiful scene towards the end of the film where the couple are lying beside one another in bed, a sheet of lace separating their bodies just like that delicate, laced dress that initiated the unravelling of Einar’s self-identification – along with the inevitable fraying of their marriage. Coming just before Lili departs for the final stage in her sex change operation, so life-threatening at a time when it had barely been attempted before, Gerda whispers to her, “I have always loved you”. “No, it was Einar you loved”, is the response. Their fingers unite against the translucent muslin wall: “I know. But it was always you.”

THE DANISH GIRL will not be for everyone. Just as the above sequence could make you cry or cringe, audience reactions to such a stylised production will inevitably vary. On another level too, we can anticipate mixed responses. Even in the Cambridge Picturehouse where I viewed this film, I couldn’t help but notice some audience members let out a chuckle when Redmayne first appeared on screen in women’s clothing. These were giggles not sneers, but it still seems that as a whole we do not yet know how to respond to visions of drag on-screen. And why should we?  In the UK in particular, the ghosts of the “transgender” characters who almost always targeted a comedic effect (remember that loveable duo in the hugely successful BBC series LITTLE BRITAIN or the number of male comedians raising a laugh as old, bespectacled, screeching women?) probably still loom larger in our minds than today’s more serious transgender castings in a minority of Amazon or Netflix series. THE DANISH GIRL advances outdated performances, clearly, in reflecting sensitively on the transgender subject, but we can also ask whether this mainstream film was ever the appropriate stage for the potentially pricklier details of transgender experiences, as it necessarily bears the burden of appealing, first and foremost, to mainstream audiences.

The film’s closing words tell us that Gerda continued to paint Lili for the rest of her life. Following THE DANISH GIRL, we can no doubt expect a growing number of transgender renderings on the silver screen – hopefully more sensitive ones than what ZOOLANDER 2 has in store for us this year – and perhaps a time will come too when high-profile cinema studios open their doors to transgender actors. In the meantime though, films such as this which are more painterly than political are not insignificant in elbowing the spotlight towards a marginalised figure in mainstream cinema, waiting perhaps for mainstream audiences to show we’re ready for less frills and more insight.

One thought on “The Danish Girl”