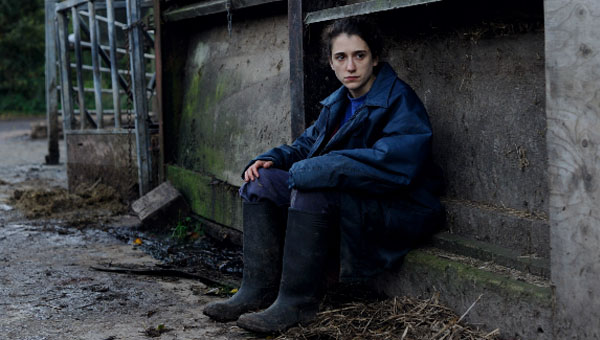 The waterlogged fields and blighted farmland of Somerset provide The Levelling’s director, Hope Dickson Leach with the perfect setting for her debut feature. An unsettling, realist drama with the Somerset levels as its backdrop.

The story follows Clover (Ellie Kendrick) who returns to the family dairy farm following the sudden suicide of her brother Harry (Joe Blakemore). Her father, Aubrey (David Troughton) – whom, markedly Clover referrers to as Aubrey and not Dad – has set up camp in a trailer outside the house which has become inhospitable in places since the floods of 2014. The insurers refusing to pay up means the farm is haemorrhaging money and Clover soon realises that it is in dire financial trouble. It transpires that Harry was in the process of taking over the farm, for which a celebration was thrown on the night he killed himself.

Clover, a trainee veterinarian and notably vegetarian, clearly has a tumultuous relationship with Aubrey and has for many years, which resulted in her self-exile, the guilt of which eventually seems to consume her. Slightly stung by the news of Harry being given the farm but at the same time broken and in disbelief over his death, Clover puts herself to work while also trying to work out what led Harry to take his own life.

Everything that touches the film does so for a reason. Every scene tells you something, nothing is added that doesn’t need to be. The music, carefully orchestrated by Hutch Demouilpied is used to enhance the silence between words, to articulate through the hush of what the characters aren’t saying. Photographed beautifully by Nanu Segal it captures the harshness and magnificence of the landscape. Shots depicting endless skies and the twist of starling murmurations reflect not only the external landscape but the characters own internal dialogue and emotional state: Hard and unyielding but at the same time, delicate.

The rich and textured wide-angle shots of the Somerset landscape are accompanied by almost claustrophobically close shots of Clover and Aubrey, providing the perfect chance to capture their honesty, buried by lack of communication but something that their faces cannot conceal: The pain and the anxiety of a family who are hanging on by a thread. The smallest scenes, the most insignificant actions are made vast and fundamental under the flat, incessant sky.

Said to have been influenced by film-makers such as Belgian duo, Jean-Pierre and Luc Dardenne, the film also captures the style of filmmakers closer to home, with the likes of Ben Wheatley, whose A Field in England (2013) and Sightseers (2012) have a similar, underlying sense of unease with delightfully understated performances and the British countryside as its canvas.

The Levelling is brilliantly moving. It provides insight into an un-captured world. The strong, nuanced performances add authenticity to the story of a family in turmoil and prove that Hope Dickson Leach is someone to watch out for and that her intense and thought-provoking debut is definitely a film worth seeking out.

One thought on “The Levelling”