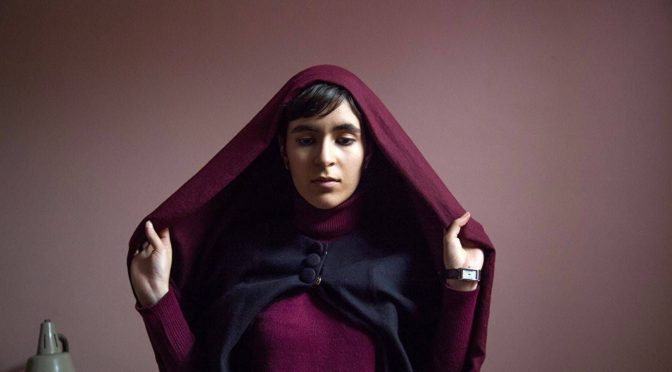 AVA is the fictionalised account of a teenage girl growing up in Iran. Our title character is a teenager we recognise – we see her gossiping with her friends, tolerating the strictures of school and finding solace in her talent for the violin. But one day a tiny act of rebellion thrusts her into a downward spiral of accusation and recrimination, threatening her friendships, her family and ultimately her future.

The directorial debut feature of Iranian-Canadian filmmaker Sadaf Foroughi, AVA is most powerful in its portrayal of the ways a patriarchal society can drive women to police one another’s relationships and private lives. Crucially, men are largely peripheral to the oppression we see here. Instead, Ava (Mahour Jabbari) is scrutinised and accused by other women: by her mother; by her teachers and – lastly, heartbreakingly – by the classmates who turn against her. Since relationships outside of marriage are forbidden, the normal bread and butter of teenage gossip can be swiftly transformed into damning evidence. In one later scene, the headteacher – who wears white gloves, as if to protect herself from the ‘uncleanliness’ of her students – informs a student that she may be expelled for having a boyfriend (an assertion based on rumours). In the style of the witch-hunt, the teacher implies she can reduce her punishment if the girl informs on her peers, a trick that can’t help but recall THE CRUCIBLE.

The school itself exists as a microcosm of the society. Writer-director Foroughi shows us a world where people must constantly hide because they are being watched from all sides. This is emphasised by a voyeuristic camera that observes the private lives of the characters sidelong, from a distance on the street, furtively through doors and windows, and reflected in mirrors. Most pointedly, this ‘watching’ camera is introduced in the very first shot – showing us the viewpoint of Ava’s mother, the instigator of her persecution. Single takes often linger to the point of outstaying their welcome, echoing the unrelenting scrutiny. Mahour Jabbari (in an impressive debut performance) effectively portrays Ava’s growing isolation. As the film progresses her face transforms, becoming numb and masklike. In response the camera’s focus changes, giving ever more attention to her hands, significant throughout the film because of their link to her music, itself a source of freedom and optimism for the future. In a world where people must police their expressions in public, Ava’s hands become more informative than her face. During a distressing conversation with her classmates, her face remains largely neutral, but her agitation is visible in the erratic motion of her hands. Close to the film’s climax, when Ava has been pushed so far into isolation that her expression telegraphs nothing at all, she reaches out to take someone’s hand in a last attempt to connect – but draws back from the contact at the last minute.

The tragedy of the story is that the spiral of accusation is triggered by other women, particularly Ava’s mother. Always supervised, Ava moves in a tiny world – between her school, her house, the house of her best friend, her music lessons. But this isn’t enough for her mother (Bahar Noohian), who pushes her to give up music, to stop seeing her friend. Noohian’s tight, anxious face tells us in no uncertain terms that her overreaction, her need to shame Ava for normal teenage rebellions like putting on lipstick, come themselves from a place of shame. The ultimate revelation of the source of that shame feels both satisfying and inevitable, echoing films like SICILIAN GHOST STORY in its confirmation that adults are hypocritical, and fundamentally untrustworthy.

It would be dishonest to describe AVA as a smooth ride. Foroughi pulls no punches, gives no easy answers and above all roots her story in an uncomfortable reality. Aided by talented central players, she shows us how a patriarchal system operates – silencing individual voices, isolating dissenters, and pitting women against one another to reinforce their own oppression.