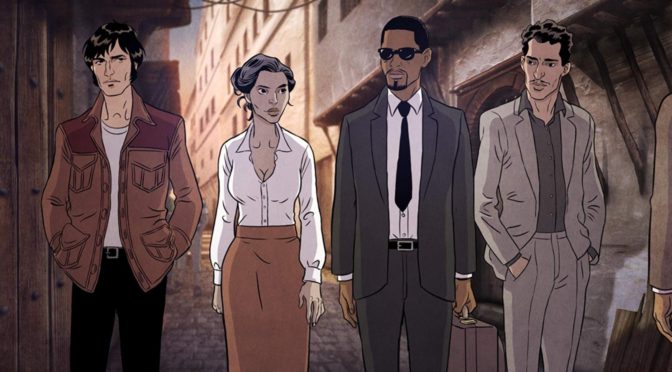 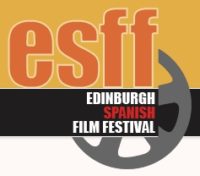 Fermin Muguruza – musician, singer, producer, and now director – has come up with a lively mishmash of racial issues, politics, music gatherings, and espionage vibes in the guise of a nail-biting cross-border road trip.

Originally a screenplay written by Muguruza and Harkaitz Cano, BLACK IS BELTZA was then turned into a graphic novel illustrated by Jorge Alderete before becoming this film under the same title. Screened at the last edition of the San Sebastian Film Festival, BLACK IS BELTZA was presented as part of the Edinburgh Spanish Film Festival. Kicking off in 1967 at the border between France and Spain, the film introduces us to its Basque protagonist, the young and dauntless Manex Unanue, while he is driving away from a group of Spanish officers who are tailing his car. Cutting the scene on a cliffhanger – Manex and his friend have been cornered and the officers seem just about to shoot them – Muguruza decides to play dirty. In a rollercoaster of flashbacks, he methodically pulls strings to show us Manex’s story bit by bit.

“BLACK IS BELTZA is so filled with events, historical figures, names, and locations your head is going to spin fast in the attempt to follow its erratic pace.”

It is the 1965 when the main event that triggers the film’s storyline happens. The giant figures of San Fermin are invited to a parade in New York City. Due to the tense social climate and racial discrimination, all but two figures are allowed to participate: the two black giants are banned. Being one of the two to carry the figures, Manex manages to get himself into every kind of adventure. First, he makes friend with a black guy from Harlem, then he is in Cuba where he meets Che Guevara and becomes a spy. He starts travelling the world and has several love affairs. Through Manex’s life, we witness all the major events that revolutionised the world in the 60s, like the protests after the death of Malcolm X, Andy Warhol’s factory, the Black Panthers, the Cuban secret service, and the inception of the hippy movement. As a result, BLACK IS BELTZA is so filled with events, historical figures, names, and locations your head is going to spin fast in the attempt to follow its erratic pace.

While sometimes the film seems to give in to its own rhetoric, some others it tends to be rather pedantic without being sufficiently clear in the way it presents facts. Capriciously leaping to and fro the past and the present of the story, BLACK IS BELTZA often seems to lose its focus, caring much more to add as many iconic names of the 60s as possible to the mix than to deliver a coherent narrative. The character design may appeal for its sharp and almost stark style but the devil-may-care, tough attitude of the hero who is going to save the day is honestly too much to handle in the long run.