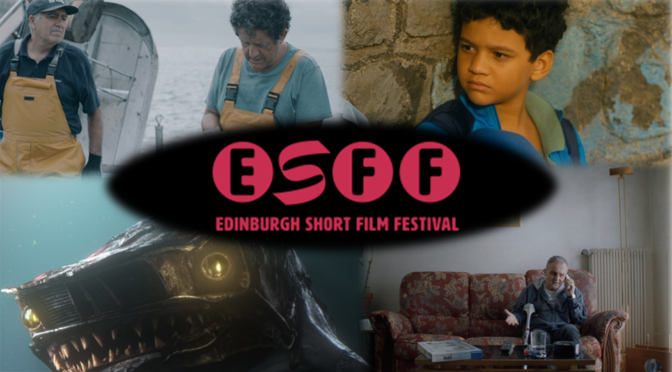 As the first section of the Edinburgh Short Film Festival programme, Tribes and Tribulations features an international set of stories revolving around social groups and communities – the challenges of co-existing, empathy in times of adversity, and lone figures alienated from their own environments.

Starting with LITTLE SHIT, this is Richard Gorodecky’s Best British Short Film Award-winner at the BFI London Film Festival, about a lonely kid traversing his impoverished environment in search of meaning. At home, he has to deal with a dying mother and abusive brother. Like Lynne Ramsay, here is a filmmaker who pierces through the social veneer to find beauty in the most banal setting or experience as a child might. With the 4K format and black-and-white grade, Gorodecky achieves stunning tones with the cinematography, with a painter’s eye for elaborate composition and detail, truly immersing us in a world in need of magic. But if there is one wish, it would be for a more resolute finish – the whole thing ends at a point where various elements are set up, but its open-endedness is more the result of neither thread resolving itself, rather than deliberate ambiguity. Like a true photographer, Gorodecky opts for snapshot over story, and leaves us reaching for more.

Following this is a minimalist Spanish mystery drama called ONE, by Javier Marco. A trawler crew discovers a plastic bag with a ringing phone in the sea. In the dying bars of battery life, the captain talks to the unknown person on the other line and is told: ‘Mourad is missing.’ This minimal setup doesn’t require much from main actor Pedro Casablanc, but since we never leave the trawler deck, viewer engagement with the film rests on his ability to emote on the narrative situation, and his efforts along with the film’s penchant for long takes, set the right tone. It takes its time in getting to it, but the contemporary political allegory which hovers above makes for an admirable and poignant exercise in subtlety. There have been several short films in the recent past which have tackled the refugee crisis head on, but the quiet measure of ONE is the kind that cuts deepest.

“…several short films in the recent past which have tackled the refugee crisis head on, but the quiet measure of ONE is the kind that cuts deepest.”

Ostensibly a documentary, Zeynep Kececiler’s AFGHAN COAL details the lives of child-miners in the remote town of Tor. From the outset, the film is unusual for its continuous use of static group shots, which are like 4K daguerreotypes of frontier settlers. Though these tableaus initially seem repetitive, one realises that the vitality of the film rests in the inflections and tones of the testimonies accompanying the images, injecting them with a fine texture and perspective. These two components – the visual style and the soundscape – combine to tease a narrative out of its material. Indeed, we are presented with a panoply of characters who could serve as narrative figures – Emin, whose narration bookends the film; Semsettin, his struggling brother; Hajji, the Fagin-like owner of the mine. But the film’s cleverest decision is the (attempted) exclusion of the director’s presence in the story. With only her subjects occasionally acknowledging the camera, Kececiler achieves a portrayal of the community with a lens that makes no pretensions of catching the ‘perfect moment’ as it occurs. Instead, she expresses a universal truth about suffering and sacrifice by directly composing her characters as small figures on a massive canvas.

“AFGHAN COAL […] expresses a universal truth about suffering and sacrifice…”

Moving to the selection’s first palette cleanser, we get Pierre-Marc Drouin’s humorous POISSON DE MARS, an initial study of a man’s depression after a breakup which erupts into a FESTEN-like battle of voices at a family reunion. Though it’s less remarkable than some of the other films on the programme, its juxtaposition with the previous two films is well-placed and serves as a bridge to exploring stories in less extreme conditions. Some fine performances here, especially from Steve Laplante as the hapless protagonist – a man who even finds difficulty in spreading pate over a cracker. Additionally, it features several swipes at academic navel-gazing, where even the spoken word is subject to real-time analysis – the psychologist as the dumbest smart guy in the room. A good dose of cringe which reveals the family to be the worst tribe of all.

Up next is Zoel Aeschbacher’s BONOBO, one of the more visually distinctive pieces of the selection. Taking FISH TANK’s lead, we are presented with life at a high-rise estate in the claustrophobic confines of the academy ratio; three lives which involve the same malfunctioning elevator, culminating with a dramatic intersection. Though it starts as a kitchen-sink piece akin to LITTLE SHIT, its progression reveals it to be a suspense drama, with a finale that demonstrates an expertly-rendered equation of pace and coincidence. In the final couple of minutes, you can see the endpoint from a mile off, but the clockwork montage is as precise as the glissando runs of the overhead orchestral score, giving the viewing experience an incomparable thrill.

“[The finale of BONOBO] demonstrates an expertly-rendered equation of pace and coincidence.”

With close links to BONOBO and LITTLE SHIT, comes the programme’s keystone: Guillaume Levil’s ARTHUR RAMBO, here with its European premiere. Set in Réunion, the film is produced by the prolific Les Valseurs, and concerns a little boy, Alain, with a prodigious memory for the poetry of Arthur Rimbaud, which he recites to motorists at a traffic stop for extra change. Despite its simplicity, its technical aspects are entirely attuned to portraying Alain’s socio-economic alienation, and his difficulty of jumping classes – the framing consistently positions Alain in the centre of the wide angle, throwing him into relief yet isolating him from a world which will eventually bring him down. And nothing compares to Joshua Peberel’s melancholic performance. It’s a miracle just to get a kid to meet his cues, but Peberel actually develops his recitals into something more and more plaintive. As he tastes sacrifice, betrayal and loss, what is previously rote regurgitation now becomes lived experience; with a few lines from Rimbaud and Baudelaire, and a distant gaze into the sky above, Alain sees ‘what men have only imagined they saw’ – the vision of a lifetime. Poetry is seldom seen on the silver screen, but when it happens, you’ll be glad you looked.

“[With ARTHUR RAMBO], poetry is seldom seen on the silver screen, but when it happens, you’ll be glad you looked.”

It is just as well that we have Florian Brauch’s animated HYBRIDS as another palette cleanser. The shortest piece in the selection, this impresses with its imaginative vision of a deep-ocean scrap heap where it’s nothing but fish-eat-fish. Though the environmental angle is quite clear, there are startling visions of organic bodies suffused with garbage from the surface – fish encased in metal bin tops, aggressive little bottle-cap crabs, and vultures with corrugated roof sheets for wings. For viewers who’d like a bit of bite (and blood) with their CGI animation, this is your ticket, while the film’s thematics uphold the programme’s focus on tribalism and hostile group environments.

Closing the evening, we have Belgian director Olivier Magis’ MAY DAY, a film in the social-realist vein of the native Dardennes Brothers, with the flippant satirical tinge of a Ruben Östlund. A newspaper courier holds an auction for someone to replace him for a month as he undergoes surgery. Argument among the attending job-seekers ensues, as the shaky cam and its jerky zooms frantically attempt to record the frenzy of insults and broken glass. An exhilarating instance of ‘petri-dish filmmaking’ – single location, multiple characters, growing conflict, and explosive outcome.

By such a finish, the programme more or less shows us that tribal formations, be it from the exotic plains to a single-room auction, inevitably bring out the worst in us – fear, selfishness, and socio-economic differentiation. Oh well, at least it makes for a bloody good bunch of films.