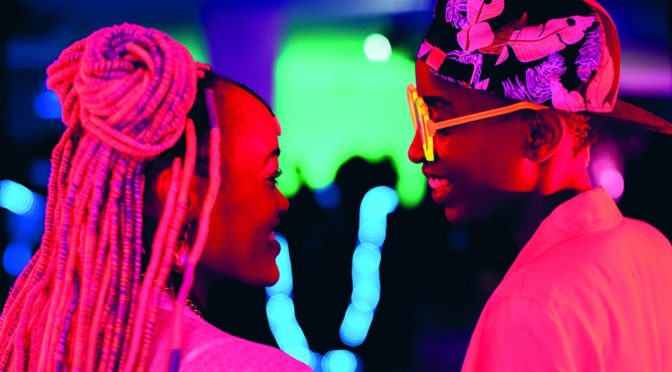 When a film has been banned, as RAFIKI has in its home nation of Kenya, as a Scottish viewer you might expect something vaguely scandalous.

Director Wanuri Kahiu has, however, created a film that embraces romantic tropes in the most endearing fashion. Many of its characters are given depth within that conventional framework, delivering a story that deals with a discriminatory environment by underscoring it with universal emotions.

Kena (Samantha Mugatsia) is a young woman in Nairobi, whose father John (Jimmy Gathu) is running for local office. When she meets Ziki (Sheila Munyiva), the daughter of an opposition candidate there is a clear romantic spark that grows very naturally across Kahiu and Jenna Cato Bass’s script. Dealing with their own feelings about the culturally taboo relationship and reactions of friends and family, the two must navigate their coming of age with some extra pressure.

Adversity facing a new love is not a new obstacle to put on film. What RAFIKI does well, however, is to convey that universal adrenaline rush of a new spark of attraction. When Kena and Ziki share an extended ‘moment’ in a secluded camper van, the editing blends medium and close up shots in a way that conveys that rush of excitement mixed with hesitation that will resonate with a wide range of people.

The cultural context it occurs in – neatly demonstrating the film’s off-screen domestic woes – lends a level of peril above that of basic parental disapproval: friendly banter between Kena and her heterosexual male friends quickly takes a nasty homophobic turn; the whole community hangs on the words of a local priest’s bigotry; talk of ‘cleansing’ people of ‘demons’ predominates.

“…across the supporting cast a number of reactions are conveyed that go beyond simple homophobia.”

The central pairing of Mugatsia and Munyiva has a chemistry that means this surrounding context is always a bass note, rather than the melody of RAFIKI. In addition, across the supporting cast a number of reactions are conveyed (the script and acting working harmoniously) that go beyond simple homophobia. Jimmy Gathu in particular does good work as Kena’s father. Although the political differences between him and Ziki’s father are never terribly obvious, the class differences are made clear. Therefore, contrasting his more measured response with that of Kena’s mother – ironically named Mercy (Nini Wacera) – prevents the reactions from seeming too designed to serve up cliched dramatic opposition to this burgeoning young love.

A touching and heartbreaking portrait of young love, the narrative framework of RAFIKI is not revolutionary. However, the skill in bringing it to screen – from both a socially progressive and artistic standpoint – means a twist on the familiar heteronormative version of the story deserves to be told, and cinematically earns the right to be watched.

RAFIKI will open the 2018 edition of Africa in Motion film festival, taking place in Edinburgh and Glasgow.