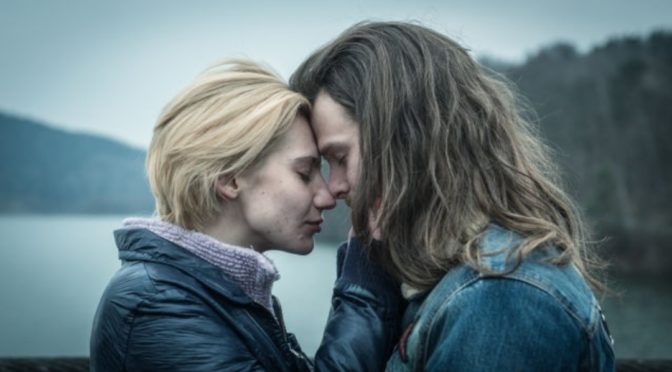 Opening on the unedifying sight of Polish shoppers scrabbling around in their underwear for cheap TVs during a Black-Friday-like chaos, Malgorzata Szumowska’s MUG is an interesting and darkly comic look at what constitutes a personal identity in the eyes of our communities, our loved ones, and ourselves.

Mateusz Kosciukiewicz stars as Jacek, the first person in Poland to undergo a face transplant after a work accident – constructing a giant statue of Jesus. Consequently, Jacek must deal with the ignorance and awkwardness of his own family, his fiancé Dagmara (Malgorzata Gorol), local community and authorities, in addition to examining how much of his own sense of self is wrapped up in his own appearance.

Kosciukiewicz portrays Jacek excellently after his transplant, under heavy make-up work. The wider cast of his family also change gears effectively, not being fearful in most cases but suitably awkward compared to the free-flowing, if aggro-laden, conversations of the opening act.

The writing allows this clash between the previous and ‘new’ versions of Jacek to come through. The character’s personality is laid out in clear – if perhaps broad – strokes early on. Further, some alarmingly racist jokes at the family dinner bring home the fact that Jacek is merely a victim of prejudice he was perhaps passively complicit in earlier.

Szumowska skilfully frames shots of the local community, albeit some blurring of parts of frames is overused (they work most effectively in the scenes re-establishing Jacek’s viewpoint post-transplant). Although effectively mirroring the deformity of multiple characters – figurative and literal – the effect is often a little distracting from the admirable acting work.

Identity crisis clichés are sidestepped effectively, whilst still allowing Kosciukiewicz to have solo scenes where Jacek questions what he has lost, and perhaps what he never really had in the first place.