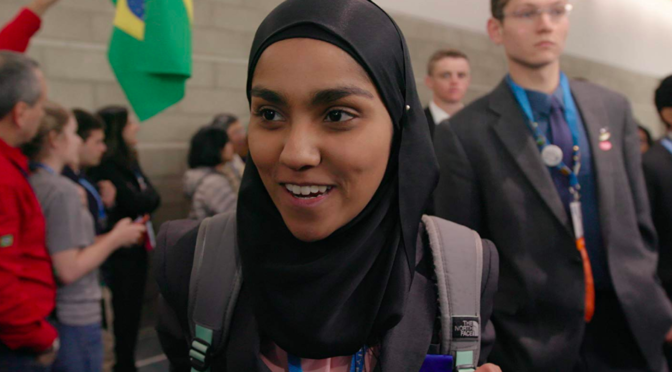 On the surface, SCIENCE FAIR might seem like a documentary constructed around aren’t-geeky-kids-cute-and-funny foundations. There is, however, much more to gain from Cristina Costantini and Darren Foster’s accomplished chronicle of kids competing to get to the International Science & Engineering Fair (ISEF).

There is some amusement at the endearing mix of confidence and immaturity these talented youngsters show, but the film has much to say about recognition of youthful achievements, modern America, its relationship to the rest of the world, and how to inspire and further young people.

The film is a globe-hopping affair covering youngsters from disparate parts of the USA, but also extending to Brazil and Germany. The US-based students vary between schools with a track record of sending students to the global event and those rising above a brutally sports-focused school environment. The kids themselves are engaged in some pretty high level science and engineering – there are no baking soda volcanoes here. Research on arsenic detection, machine learning, the Zika virus, addiction brainwave patterns, and re-imagining aeronautical concepts all feature.

Beyond the often colourful and likeable kids themselves, the film weaves in a number of extra threads. The likes of Kashfia – a Muslim student who has already reached ISEF before and goes unrecognised and largely unsupported at her school in South Dakota – is contrasted against the trio of boys from Du Pont Manual. Whilst the boys are undeniably talented, they are also much better supported. In West Virginia, Robbie has demonstrated an aptitude for machine learning and won local fairs for work with mathematical concepts, but is bored by school. Robbie’s painfully uninspiring maths teacher is contrasted with the kids from Jericho High School, supported almost to superhuman levels by their teacher Dr Serena McCalla. All of these kids can be contrasted with Gabriel and Myellena’s more resource-strapped existence in a Zika-hit part of Brazil.

There is plenty at work highlighting immigrant work ethic, with so many of the US-based children coming from immigrant backgrounds. Scientific progress being a force for worldwide co-operation is also hinted at, with the implication the USA should not let its current sceptical and anti-intellectual climate permit a slide from the world-leading position it holds.

The directors themselves present all of this very skilfully, giving each subject a decent chunk of screen time. The quirks and idiosyncrasies of many of the kids are allowed to raise a wry smile, their challenges allowed to let the heart sink a little, but without playing down the intellectual heft of their achievements. The stereotype of science geeks getting a hard time at school often has plenty of truth to it, with their hard work only getting just reward a little later in life. These young students deserve a moment in the spotlight now, and Costantini and Foster do much to illuminate a wider message that should be heeded.