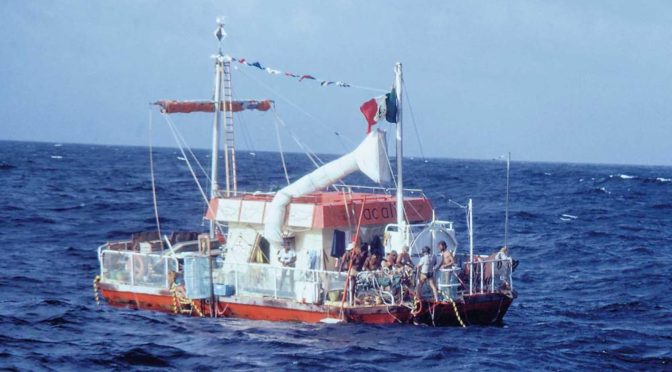 What happens when women are in charge? …when people are told what others truly think and have said about them? …when eleven strangers take to sea for months on end on a raft?

Revisiting anthropologist Santiago Genoves’ much debated 1973 Acali Experiment, wherein five men and six women set sail across the Atlantic on a motorless boat, RAFT (like the original study) raises questions about how we interact and communicate as human beings, in proximity and at great distance. The best and worst of human nature and relationships float to the surface in this retelling of a social experiment and scientific study which hoped to provoke and observe violence, sexual relations, aggression and group behaviour, all recorded on camera and in extensive written notes.

More than four decades later, Swedish artist and filmmaker Marcus Lindéen invited the 7 participants who still survive to reconnect on board the raft, and set sail into the past to reconcile what happened then and what they remember of it now. Dramatic, psychologically stirring and heartfelt, this documentary interweaves original footage with diary entries and contemporary interviews with the remaining participants, who speak with great tenderness of the moments they shared on Acali, moments of realisation, eroticism, frustration and loss.

Meanwhile, Genoves’ presence is represented by a voice reading his journals from during and after the voyage, in what feels uncomfortably like a voyeuristic echo of the intrusion of privacy he himself performed on the crew members of Acali. Shown here on screen, his graphs and notes chart the lunar calendar, menstrual cycles and frustrations of the seasick voyagers as they interact across the Atlantic, through hurricanes and stormy moods, power struggles and displaced captainhood.

The greatest lesson learnt? That despite concerted efforts for conflict, the differences which could have become animosity were the very traits which made ‘us and them’ into ‘us.’ Instead, it is theory and practice which come to blows, as the Acali Experiment takes its own route and drifts off the path plotted by Genoves, further and further from what he perhaps hoped to find, both in the behaviour of others and sounding the ocean depths of his own self.

THE RAFT will be shown again on Tuesday 30th October at 10:30am at The Cambridge Arts Picturehouse