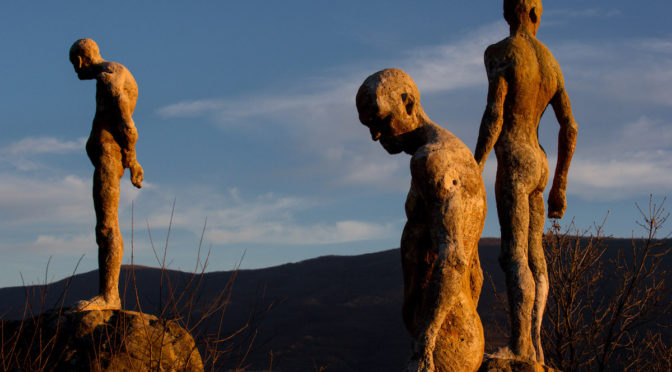 Two images recur in this documentary about the years following the end of General Franco’s brutal regime, and the struggle of victims’ relatives to get some sort of justice: a group of gaunt statues on a Spanish hillside representing those murdered (which immediately after being put up was riddled with bullets and thus ‘completed’ according to the sculptor); and flowers laid beside a busy highway commemorating a woman who with other alleged rebels was taken from her village during the Civil War, stripped and shot dead.

The tribute is renewed regularly by her now-elderly daughter, one of the many voices featured in THE SILENCE OF OTHERS, in defiance of its title. In the aftermath of Franco’s death, an amnesty (‘The Pact of Forgetting’) was declared by the Spanish parliament – not only for the rebels however but also for the henchmen carrying out atrocities on behalf of the dictatorship, which included burying bodies in mass unmarked graves and abducting thousands of new-born babies from mothers thought to be anti-Franco and giving them to loyalist families. Therefore one of the most notorious torturers, nicknamed ‘Billy the Kid’ could still live quietly in the same Madrid street as one of his many victims (now a human rights lawyer), unbothered by any government authority.

But in 2010, using the same system of ‘universal justice’ that allowed Chile’s General Pinochet to be prosecuted by Spanish magistrates for crimes against humanity, Argentinian lawyer Maria Servini started building a case on behalf of the victims, known now as ‘plaintiffs’ and increasing in number yearly. Here THE SILENCE OF OTHERS takes on the feel of a compelling class-action thriller, as gradually the plaintiffs, with the force of international law and public opinion (though still divided in Spain with diehard Franco supporters demonstrating on the streets) behind them gradually overcome the resistance of the Spanish parliament, a major victory being the junking of Franco-era street names including the one where ‘Billy the Kid’ lives.

And remains free: as THE SILENCE OF OTHERS ends in 2017 the government is still resisting his extradition (along with two dozen others accused) to face trial in Argentina. But this is the best sort of documentary: beautifully constructed and produced, seething with injustice yet tinged with hope.

THE SILENCE OF OTHERS screens at the Cambridge Film Festival on 30th October at 20.00 and 31st October at 12.45