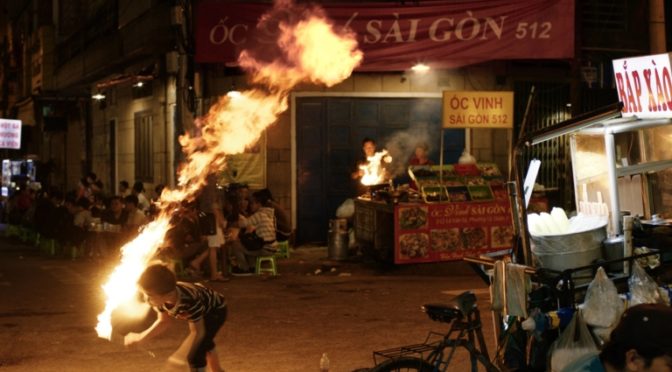 The opening evening program of the 2019 Edinburgh Short Film Festival focuses as much on what is absent as that which is centre-frame. Each short seems to tease details of the wider pictures presented in these vignettes of larger stories or issues.

A good example of this in a fairly literal sense is the program’s opening film: MOTHS TO FLAME. Luca Jankovic and Marco Pellegrino’s short chronicles a conversation between two men – Neil Armstrong and Buzz Aldrin – before an important mission, just as Armstrong becomes perturbed by two large moths. It becomes clear from the setting that the mission is a fake moon landing, loaned a heightened sense of production with the excellent sound use and cinematography of the short film itself. The script uses the short run time to puncture ideas of American exceptionalism (those who persevere are “just like the rest of us”) and whether – just like the moths – we are too easily distracted from our own guiding lights by a bright artificial glare.

ON, directed by Jelena Sinik, is a beautiful animation from the perspective of a young woman’s phone. We see her tired thumb taps in bed, answering calls during the day, and the world pass by when it is absent-mindedly left behind. The juxtaposition of what must be modern technology with the sparse animation style is interesting, giving a tactile feel to a portrait of how much of modern life is conducted through such devices.

MY LONELINESS IS KILLING ME is a superbly shot and acted drama, directed by Tim Courtney (who we spoke with before the start of the festival). The film follows two men, Elliott (Luke Elliott) and Jack (Jamie Robson), who occupy very different corners of the gay male community. What they have in common, however, is a lack of connection in their sexual and romantic lives. The more flamboyant Elliot struggles to be seen as typically masculine, and married Jack struggles, and perhaps even rejects, genuine emotional connection. Stunningly shot and superbly scored, the film evokes the feeling of Steve McQueen’s SHAME but highlights and dramatises issues around modern romance and toxic masculinity from a perspective that has been dominated by very heterosexual expressions. The film also benefits from the big-screen presentation and has already garnered attention as a BAFTA Scotland award-winner and on the wider festival circuit.

TURNING TIDE provides a good acting showcase for young Patrick McLaughlin as David, encountering a downed German fighter pilot in coastal Scotland. The film seems quite reliant on special effects in its early stages but it develops into a tense and well-staged standoff, driven by the expressive work of the young actor. That much of this is done without excessive dialogue is also to writer-director Andrew Muir’s credit.

STAY AWAKE, BE READY (fresh off a festival run that included a prize win at Cannes) looks over a busy Vietnamese street corner, switching focus and characters as the camera pulls back slowly in a single take. The single take has become something of an over-relied upon technique in short film but when used effectively it retains its a spellbinding effect (indeed, another single-take film – albeit an illusionary and very different one – screens at ESFF with a similar impact: IN THE FALL). STAY AWAKE, BE READY is perhaps the best illustration of the uniting theme of the BEYOND THE FRAME strand. Pham Thien An’s camera reveals more of the scene as we go on, and details that were initially beyond the frame become the main focus.

STARTING OVER follows a young man whose release from an Edinburgh prison is imminent. Brian Vernel gives an excellent performance as Ronnie, the young inmate, and captures his anxiety at being placed in an ironically vulnerable situation of freedom. Grant Stott is a likable presence as prison officer Hadley; sceptical of Ronnie’s paranoia of what lies outside but attempting to be helpful and supportive nonetheless. The interplay between the two builds well to a conclusion that is slightly heartbreaking but also says something about the lives those moving on from the penal system.

This preview review consists of films we were able to preview ahead of the screening. Other shorts in this program include:
— WITHOUT, Dir: Enni Red
— THE TAIL OF CAT BALLOU, Dir: Stuart Hubbard
— CIRCUIT, Dir: Delia Hess