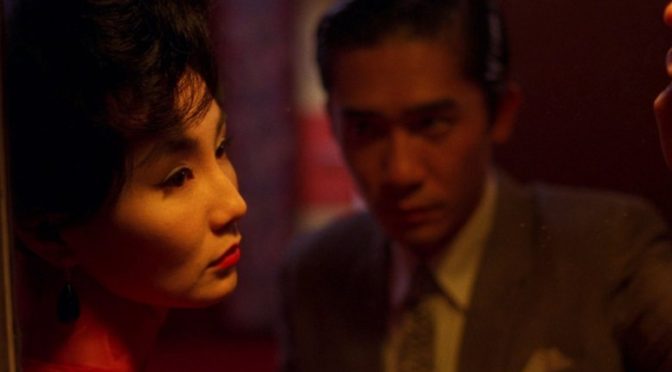 Wong Kar-Wai’s IN THE MOOD FOR LOVE lingers with the viewer after they have seen it. For some that could be because of the melancholic story, for many it is most likely because of the beautiful cinematography, or it could be a song that features throughout the film and seeps into your skin.

Umebayashi Shigeru’s sad waltz ‘Yumeji’s Theme’ is a short, hypnotic string arrangement that sounds both beautiful and unsettling, thanks to the harrowing isolated violin melody at the song’s core. Surprisingly, the first time it comes up in the film, it feels out of place, almost contrapuntal to the images on-screen. After all, Umebiyashi originally composed ‘Yumeji’s Theme’ for Suzuki Seijun’s 1991 feature, YUMEJI. On top of that, the haunting aura that the song emanates feels strange and unwarranted. First appearing a mere four minutes and ten seconds into the film, the viewer is unaware of the truly heart-breaking nature of the story that is about to unfold, and the role the song will play in the understanding of the film.

IN THE MOOD FOR LOVE is set in 1960s Hong Kong and chronicles the brief relationship between neighbours Chow Mo-wan (Tony Leung Chiu-wai) and Su Li-zhen (Maggie Cheung), who realise their respective partners are having an affair with one another. The film’s director, Wong Kar-Wai, explores Su and Chow’s obscure relationship shrewdly in subtle but painful scenes that involve them recreating how they think their spouses met and began their secret relationship. What is fascinating about these scenes is that the viewer is often unaware that the scene playing out is a recreation: Su and Chow’s investigation into their partners’ infidelity. Upon realising this, the viewer must then change their perception of the scenes. Set up to tease the audience, these scenes suggest that the pair are no better than their partners, resorting to getting back at them the simplest way possible: to have an affair of their own. However, when that moment of realisation comes, and the scene is shown to be a farce, that disapproval turns into heart-wrenching sadness, as what the audience is really witnessing is two people struggle to understand their partners’ betrayal. We’re given a new, deeper understanding of the scene, and the pain the characters are going through.

To gain a deeper understanding of Wong Kar Wai’s use of ‘Yumeji’s Theme’, it is important to note obsessively repeating one song wasn’t anything new to him by the time he made IN THE MOOD FOR LOVE. He had experimented with the convention to an extent in his previous films, CHUNGKING EXPRESS, and HAPPY TOGETHER, but it is in IN THE MOOD FOR LOVE where he uses this motif most consciously. ‘Yumeji’s Theme’ plays nine times throughout the film’s run-time, and not just for a few seconds in the background of a scene. The song is used as a set-piece. Each time it is featured during the narrative it takes up several minutes, often forcing the film into slow motion. These sequences depict Su and Chow in various stages of their emerging relationship: acquaintances passing each other down a narrow corridor; comforting friends; yearning lovers who have developed real feelings for each other. As ‘Yumeji’s Theme’ plays relentlessly, the beautiful and unsettling way the strings come together begins to mirror the relationship the two lead characters embark on. Each pluck of a string starts to sound like a taunt, whether that be from their unfaithful partners, or from their own minds as they question whether they too are in the wrong. When Su and Chow start to develop an affection for one another but refuse to act on them until it is too late, the harrowing violin – that a first sounded like such a juxtaposition – perfectly encapsulates the harsh truth that this story isn’t going to have a happy ending.

Film writer Anthony Rayns summed this all really well when he wrote that “…the bittersweet tone of the not-quite sexual relationship crystallises in the haunting piece of music.” The song plays such a frequent and pivotal role in the film that, as a viewer, we have no choice but to relate the images and events we have seen to that song. This is emphasised perfectly by the final time the song is heard: the closing credits. As soon as they start rolling and ‘Yumeji’s Theme’ plays, it encourages the viewer to recall everything they have seen, felt and experienced, each time that song was featured throughout the film. This leaves the viewer just like the characters: haunted by the memory of their relationship and what could have been.

One thought on “A Deeper Understanding: In the Mood for Love and ‘Yumeji’s Theme’”