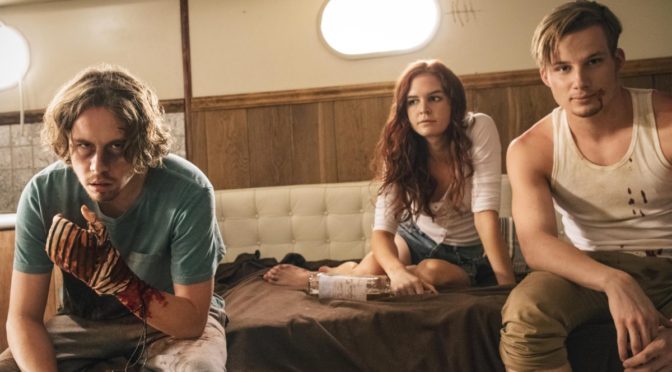 As the old saying goes: two’s company, three’s a crowd. HARPOON tests the wisdom of this adage, setting three best friends adrift on a pleasure yacht in the middle of the ocean, where diminishing tempers and food supplies force secrets, rivalries and sexual tensions to bubble up from below. While some of the later reveals would have benefitted from a little more finesse in their execution, HARPOON still triumphs as a brilliant blend of horror and humour, and a strong argument against the commercial sale of spearguns to people with anger issues.

The film begins with the narrator (Brett Gelman) musing over the different types of friendship, before introducing the audience to the central trio. Wealthy Richard (Christopher Gray) is prone to fits of extreme jealousy and rage. His girlfriend Sasha (Emily Tyra) is a nurse who plays mother figure to both Richard and his friend Jonah (Munro Chambers), who’s recently orphaned from his emotionally distant and judgemental parents. Suspecting an affair between Sasha and Jonah, Richard beats Jonah senseless. To make amends, he takes them on a yacht trip, only for it to become stranded in the middle of the ocean. Jealousies emerge once again, dragging plenty of secrets up with them, and Sasha and Jonah begin to regret buying Richard a speargun as a birthday gift.

The Chekhovian nature of this weapon is made pretty clear from the outset (not least because the title refers to it), but the inevitable firing of the harpoon is far from the worst thing that happens on this voyage. In between the intimate relationship melodramas and grainy, black and white flashbacks, HARPOON often veers into an intense gore-fest, treating viewers to such visuals as Richard draining the blood from a seagull; Jonah’s festering, untreated infection; and Sasha performing a DIY amputation. These visual effects, created by Efrain Perez and Kenji Rodriguez Tanamachi, are as visceral as they are excessive.

While the meat of the script is perhaps not as strong as the effects (certain late-in-the-game twists could have been delivered a little more elegantly, with the big reveal at the end essentially just consisting of an exposition dump), the exaggerated characters allow for some manically fun performances from the leading actors. Tyra and Gray get plenty of opportunity for relationship-based dramatics when the latter’s anger issues devolve into domestic violence, and Gelman’s narration offers a detached, sardonic view of proceedings that highlights the film’s sense of humour and bitter irony. The standout here is Chambers, whose Jonah becomes more erratic as his wound worsens, eventually going full psychopath and chewing so much of the scenery that it’s a wonder the boat doesn’t sink.

At 83 minutes, HARPOON manages to bring a breezy pace to the long days stranded at sea, helped by plenty of upbeat, poppy tunes in Michelle Osis’ score. There’s definitely room for more character development, especially given the fact that so many twists and turns are crammed in during the final act, but the focus here is much more on black humour and overblown gore. HARPOON doesn’t take itself seriously at all, and encourages its viewers to do likewise, inviting them along on a very enjoyable, if slightly rocky, voyage aboard Jonah, Richard and Sasha’s sinking friendship.