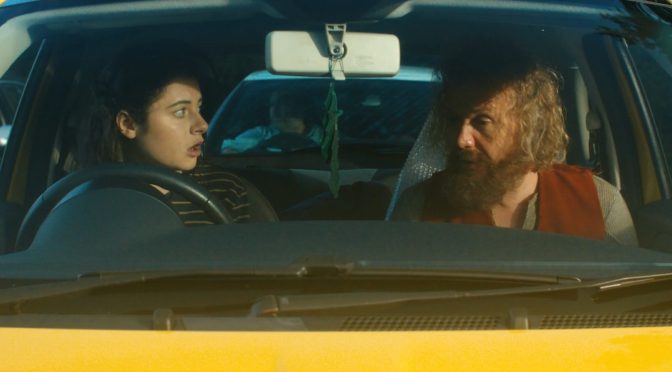 On her eighteenth birthday, precocious teenager Charlie (Naomi Morris) is given a car. When she discovers a life-shattering secret, she resolves to drive to the very north of Scotland to discover more. One problem – she’s still on a learner’s licence, and requires a ‘responsible adult’ to accompany her. In steps homeless Oz (Andrew Murton), the closest thing she can find.

When analysing ABOVE THE CLOUDS, screened at this year’s Woods Hole Film Festival, it is tough to decide whether to label it as a dramatic comedy or a comedic drama. The distinction is ultimately irrelevant, but both aspects of the film are on equally excellent footing. Much of the humour in the film is subtle, more conversational – inclined to bring a smile to the face rather than a belly-laugh – but the odd slapstick moment or blue joke has the festival audience chuckling out loud. The film has a light, playful tone, but still conveys the gravity of the serious issues at play. Oz’s situation at the beginning of the film hits home just how vulnerable those that live on the streets can be at a time where homelessness is rising year on year. Charlie is shockingly naïve in a post #MeToo world, seemingly unable to recognise the dangers her travelling companion or the men they meet along the way could pose to her. The film lulls you into believing that it supports this child-like world-view, until it’s shattered in a moment so sudden that we feel Charlie’s devastation deeply. Luckily for both of them, they have each other; and it’s in their relationship that the heart of the film, and much of its dramatic weight, truly lies.

The success of the film, naturally, would not be possible without the performances of its two leads in their feature film debuts. The director has mentioned how Andrew Murton became something of a surrogate uncle to Naomi Morris during filming, and this shines through. Whilst it is difficult to mention one without the other, and both performances deserve huge praise, Naomi Morris’ portrayal of Charlie is worth singling out. She manages to walk the incredibly fine line of making Charlie seem both unique and special as well as a relatable, ‘normal’ teenage girl. One to watch for the future.

Away from the leads, some of the best moments are found in our travellers’ encounters along the way. From a pig-enthusiast policeman (Paul Panting) to reluctant dogger Leo (Ian Bustard) to perennially bickering father and son mechanics Alex (Peter Hannah) and Tim (Gordon Kennedy), these are some of, not only the most comedic, but the most human parts of the feature. Every secondary character is quirky and delightful in a way that is reminiscent of the Coen brothers at their best.

In the Q&A after the screening, director Leon Chambers described how the prevailing wisdom among filmmakers is that, due to geographical limitations, you can’t make a good British ‘road movie’. Something he was determined to prove wrong. Well, Mr Chambers, you were successful. This is a great, British road movie.

ABOVE THE CLOUDS screened as part of the Woods Hole Film Festival in Cape Cod.