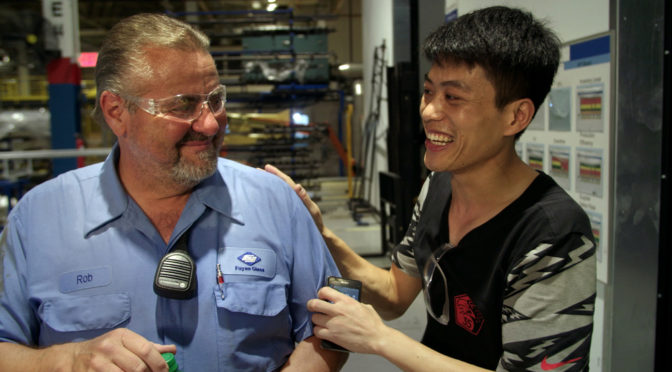 While there are profound shortcomings to Julia Reichert and Steven Bognar’s AMERICAN FACTORY, what can’t be denied is the film’s felicitous ability to both depict bewilderment and itself bewilder.

This is most evident in a portion of the film in which a group of American workers travel to China to view the processes in a Fuyao glass factory. Daily working conditions are woeful, safety procedures are negligibly followed (if at all), employees are alarmingly worshipful, and the whole company air reeks of the military. The company has its own theme song of sorts, sung by employees with the reverence afforded to prayer. This continues in elongated form during a company party, at which Fuyao’s employees perform song and dance numbers based around the glass manufacturer’s business successes, including its, apparently, marvellous market research integration. This is enormously strange; but the mood in the room is jubilant, the colours are bright, and there seem to be no stirrings of discontent.

Cut to Drayton, Ohio. In the Fuyao Glass American factory, opened in 2014 as but one instance of heavy Chinese investment in American industry, employees are silent, visibly fatigued, and increasingly frustrated. This same site was closed in 2008, an effect of the financial crash — many of those in the building worked for the previous incarnation. The new Chinese bosses bring with them new standards, new managers, and some new employees. Reichert and Bognar, at first, capture the details of this new environment, both for the Americans and the Chinese employees, in a patient, probing manner.

A Chinese manager delivers a lecture on the general characteristics of the American worker: his generalisations are funny, pointed, and essentially all criticisms, which will end up haunting the film and its conclusion. The ‘culture-clash’ element is for a while well handled and entertaining: folks are learning from each other, forming friendships, vaulting the language barrier one jump at a time. Many of the film’s American subjects are happy to be working there again, but there are adumbrations of what’s to follow: wages are lower, unions are unrecognised and wholly unwelcome — the chairman threatens to pull his investment if a union forms — and there are constant formal disagreements to temper, with management, with policies, and with other employees. As conditions worsen, the number of on-site injuries increases, people are fired — or ‘permanently replaced’ — for supporting unionisation, and squeezed to meet targets at the expense of quality: the atmosphere changes and a stand-off begins. A vote on unionising is to be held.

Frederick Wiseman’s example is coursing through this film, but AMERICAN FACTORY doesn’t have the strength of Wiseman’s films: their slow-building analysis of institutions, the withering critiques left totally to a viewer’s judgement, a force of affection and respect for the subjects which radiates through the stillness. Reichert and Bognar attempt to make a patchwork of faces, with snippets of their stories, maybe a peek at life beyond work for them, but nothing more. It can read like an attempt to cover as many people as make up this workforce; or it can feel like glibness, an attempt to usher people into the film’s argument when convenient (this glibness is ramped up by a score which ironically chirps away while some mistake is caught on camera).

Produced by Higher Ground Productions, Michelle and Barack Obama’s production company, AMERICAN FACTORY is the first in a line of films which will be distributed in collaboration with Netflix. One effect of this may be that this film will, possibly like the others to follow, become tagged as ‘Obama-approved messages’, which comes with its own problems.

The film itself bears some of the marks of Obama’s method: smooth rhetoric, but unsound argumentation. The directors miss out the parts in which they demonstrate a care for their working-class subjects (American and Chinese), obviating paying attention to the lives they lead and to the part of the factory in those lives. This role is confused with a warning about automation, a topic briefly alighted on, and the labour-related reckoning the world will face in just under a decade’s time. Without situating and emphasising the presence of the people who will be affected by these impending changes, the directors’ argument falls wide of its target. By neglecting the very people whose (past, present, and future) industrial neglect makes up the subject of the film, AMERICAN FACTORY decidedly fails on its own terms.

One thought on “American Factory”