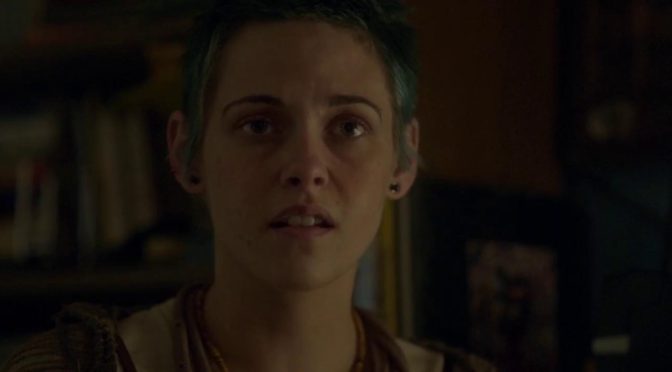 What’s really in a name? William Shakespeare once posited that a rose by any other name would smell just as sweet, but things are rarely ever that easy.

Exhibiting the myriad complications that can arise from something as simple as a name, J.T. LEROY tells the story of Savannah Knoop, a quiet, gender-fluid twentysomething who becomes the public persona of her sister-in-law’s fictitious pen name of the title. Proving that the truth can often be stranger than fiction, this quirky, off-beat biopic is a fun enough ride through the trials and tribulations of fabricating a famous person, but one that all too quickly glides past some of its more interesting themes, missing the opportunity to bring true depth to the story.

Adapted from Knoop’s memoir Girl Boy Girl: How I Became J.T. LeRoy, the film follows their account of how they came to pose as J.T. LeRoy – the literary alter ego of their sister-in-law, Laura Albert (Laura Dern). Knoop (Kristen Stewart) begins by simply donning a Warhol-esque wig and sunglasses and grunting their way through a couple of photoshoots, but the scheme soon complicates when the world demands more and more of the elusive author, culminating with actress/director Eva (Diane Kruger) seeking to option one of LeRoy’s novels as a film.

At its core, J.T. LEROY is a film about identity. Albert confides to Knoop that in her darkest days, she would reach out to suicide hotlines, but was always unable to present her problems as her own, choosing instead to create characters and sharing her pain through them. By this method, she brought into existence Jeremiah “Terminator” LeRoy, and wrote critically acclaimed literary works in his name. This focus on identity is further emphasised in the parallel between Knoop and the central character of LeRoy’s autobiographical novel, Sarah – the former a gender-fluid person masquerading in the guise of a fabricated male author, the latter a young boy pimped out to truckers while dressed up as a girl, with both tales ending in trouble when the truth is discovered.

Despite being the conduit through which the viewer experiences the story, Knoop is a rather flat presence in the film, with Stewart’s performance only really finding traction when she is affecting J.T.’s well-documented shyness with closed body language and socially anxious mumbles. The supporting cast fair much better, with Kruger bringing an icy, manipulative hunger to the opportunistic Eva, and Jim Sturgess presenting some relationship drama as Knoop’s brother/Albert’s husband Geoff, when the latter begins prioritising J.T. over him. Standing out from the rest, Dern’s performance as Albert is easily the best part of this film. She subtly balances the more nuanced elements of her character – the jealous, manipulative and hypocritical side – with the goofier moments, such as the outrageously bad English accent she speaks with when portraying J.T.’s obnoxious manager, Speedie.

As funny as it is to see Laura Dern swanning through crowds in a tacky red wig, shouting demands in an accent so atrocious it would make Dick Van Dyke blush, the reasons behind Albert creating these characters – including past abuses and weight issues – are mostly glossed over. Even the creation of J.T. stemming from her need to call the suicide hotline but feeling unable to speak as herself is only briefly mentioned, and even that is never fully explored. Similar treatment befalls some interesting themes that the story brushes up against, such as ideas of celebrity, creative liberty and the importance of truth, any of which would have made a fascinating cornerstone to this ultimately superficial narrative.

There is still plenty to appreciate here: director Justin Kelly, who co-wrote the script with Knoop, brings plenty of energy to the film and draws out the pathos in the more dramatic scenes, and Tim Kvasnosky’s score is a wonderfully eclectic mix of punky tracks and mischievous flute sections, ensuring plenty of personality throughout. It just remains a shame that the most interesting questions that are raised by J.T. LEROY – regarding the psychology of its main characters, and what drives them to the actions seen on screen – are ignored, and that a film so focused on the concept of identity never manages to fully commit to one of its own.