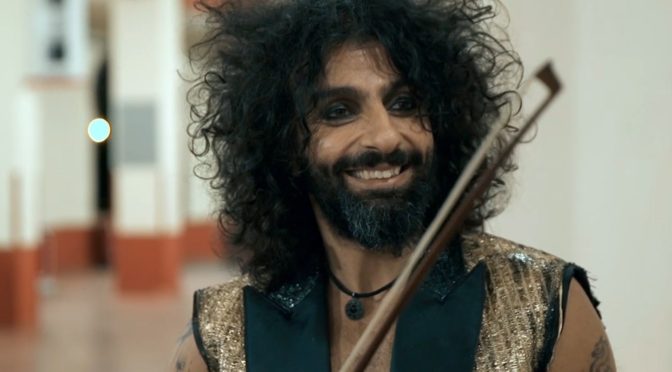 Nata Moreno’s ARA MALIKIAN: A LIFE AMONG STRINGS is an intimate documentary focused on the Armenian/ Lebanese violinist, indebted to his ancestral history.

Following Malikian’s childhood in war-torn Lebanon, his emigration to Germany and his later move to Spain, Moreno intimately traces Malikian’s lineage and influences to the man he is today. From the outset, it is clear that the fifty-one-year-old is presented as a dexterous enigma of a man and a sensitive soul with magnetic energy, comparative to the greats that came before him.

Moreno’s documentary is an incredibly personal biography, letting him dictate his past with accompanying information from his close friends and colleagues. The documentary has a captivating political context; Malikian’s grandfather was a victim of the Armenian Genocide and his father was heavily involved in the Lebanese civil war. We are shown his battles living in a war zone, and how he plays music to soothe neighbours in trying times. His music exceeds his own experiences, particularly one piece named “1915” – the date his family faced the atrocities of genocide. We also see the inner strength of Malikian’s character, such as his battles with prejudice that helped shape his music. Moreno takes us down a path of self-discovery alongside Malikian, where we are neither a subject nor his audience. Like his music, we exist with him.

Each sequence of the film cuts between Malikian in his early life and his life as an elder man, aged but not ageing. His years of practice are worn on his face like a badge of honour, which Moreno lingers on with stark familiarity. By the time the credits roll the audience has seen Malikian at his most open, his most accessible, and his most human. For such a mystifying man, Moreno captures him with raw realism, something seemingly difficult to do as expressed by his friends.

Love or hate his music, Ara Malikian has an undeniable brilliance of character. In a documentary so revealing and honest, it is easy to see how he has made a name for himself. His talent is obvious, but the film also shows his complete understanding of the one thing that connects all human beings: music.