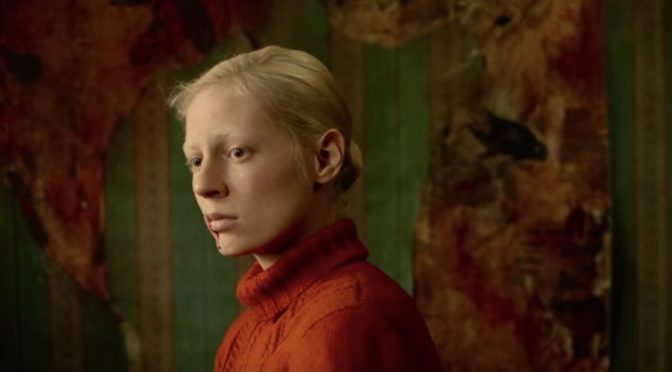 Inspired by Svetlana Alexievich’s oral history The Unwomanly Face of War, Kantemir Balagov’s BEANPOLE holds an intense sympathy for its characters in balance with a need to be honest about the untellable amount and intensity of their suffering. The question of what can and can’t be shown, or how something should be, is a bit like asking where the horizon starts and stops: it’s indefinable.

Remarkably, for so young a director (Balagov is 28) and cast, most of the scenes in BEANPOLE play out with exacting attention directed towards that question: what can be shown and how? On occasion the equilibrium tips over, such as a scene within the first fifteen minutes that marks one of the most upsetting sights this writer has ever seen in a movie; but being euphemistic about the heartbreaks of their lives would be much worse, and the only way to know who these characters are is to look at what they suffer through.

Balagov’s second feature is set in Saint Petersburg (named Leningrad at the time) in the final days of the second world war, the people fatigued and weary, enduring assorted traumas, famines, deprivations, and general impecuniousness. Iya (Viktoria Miroshnichenko), known as Beanpole because of her extraordinary height, is a nurse in a local hospital full of recuperating (or condemned) Soviet soldiers; she’s on good terms with soft-spoken section chief Nikolay (Andrey Bykov) and her patients and looks after a young boy, Pashka. But Iya suffers from post-concussion syndrome, the result of an injury sustained while on the frontline. She freezes to the spot, her face stills, it appears as though she disassociates; a kind of guttural tick emanates from her throat as if she were being strangled. After something truly appalling befalls her, Iya is reunited with a pal from the front, Masha (Vasilisa Perelygina), whose warm but unreadable presence sets off a chain of ricocheting consequences.

The performances are intelligent and tremendously moving, if occasionally opaque. Miroshnichenko, with her voice at a constant whisper, relies on delicate gestures to convey her Iya’s despondency and her hope; whereas Perelygina uses the deliberate irony of her smile to flummox those around her and the viewer as well, creating in Masha someone who hides behind affection and patient stares: but by the end we know there’s a furnace of trauma at work in her. On the other hand, Masha’s nebbish boyfriend, Sasha (Igor Shirokov), a part designed to stir up tension between the two friends, is a distraction. The young actor isn’t quite up to the task of holding the screen with the two leads.

This can be forgiven because Balagov delves into the emotional and psychic strain in the lives of his two main characters with the kind of force that Larisa Shepitko did for her characters in THE ASCENT and Elem Klimov did for his in COME AND SEE. In BEANPOLE war is far off, but its effects still devastate in the small rooms Iya lives in, the hospital wards she works in, the streets she rushes through.

But these spaces are rendered with a genuine beauty, in composition, in colour, in light. Rooms are suffused with golden brown hues, accompanied with bursts of the primary colours of green and red, perhaps a little schematically arranged, adorning Iya’s and Masha’s clothing, the walls of their room, and the shutters on their street. Even when life affords Iya and Masha its uttermost cruelty, gradations of colour can still amaze and are available to everyone.

BEANPOLE is a humane vision of the way women suffer during and after wartime; the way warmth, care, and intimacy can still exist even in the worst days of their lives. And although the most shocking events might seem to claim the greatest emphasis, after a while it’s the register of togetherness in the film that lingers persistently: it’s the image of Iya and Masha, in their respective red and green jumpers, locking their arms around each other’s bodies that perform the film’s meaning to its finest point.