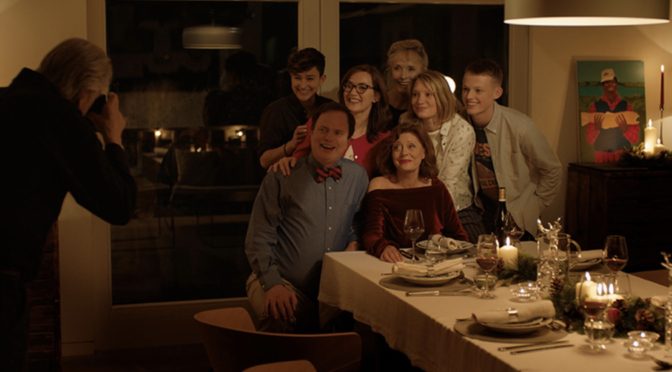 An American remake of the 2014 Danish production, SILENT HEART, BLACKBIRD sees a family return to their parents’ home for the weekend in order to say farewell to their terminally ill matriarch, who plans to end her life after they have left. This raises many issues, not just in terms of subject matter, but also the spectre of many failed remakes of non-US films. Fortunately, given the popularity of the ‘Scandi’ genre amongst western audiences BLACKBIRD manages to deliver a strong final result.

BLACKBIRD emphasises the distance between those suffering a terminal illness, both physically and emotionally, from those who are not. Susan Sarandon is often framed in the background of shots featuring the cast as a whole, while close-ups show her to the exclusion of all else. One scene, in particular, sees her as an onlooker to her own party, staring in through the window at her family inside. She’s always putting on a happy face, which very rarely slips, and this, along with the somewhat artificial behaviour of her family, gives it something of theatrical quality. This theatrical sense is developed by the claustrophobia of the house, and the muted colours of the cinematography, providing a suitable base on which the actors can build. The very best performances deliver through actions, rather than words, and the quality of performance by the ensemble helps to set BLACKBIRD apart from other films in similar territory, though the script occasionally gets in the way.

As the end nears, however, the suppressed emotions burst from the family in a number of ways. None of them are particularly unexpected, yet they are still delivered in such a way that BLACKBIRD is a deeply affecting film; the more so if it intersects with the audience’s own experience. The overly delicate actions of the family soon give way to something more passionate, and at points it does feel as though BLACKBIRD could slip into outright violence between the characters. It never does, but there are certainly arguments, some of which feel ineffective because they slip too close to this aggressive undercurrent. However, there is hidden emotional violence that is particularly effective as the characters, especially the sisters portrayed by Kate Winslet and Mia Wasikowska, attempt to control what they, and others, should feel in this intensely personal time, even if it is doomed to failure. As the façade crumbles, the film takes the opportunity to expand beyond the realms of grief into other emotions, be it love, happiness, or even morbid curiosity. The spectrum of emotion is on display in BLACKBIRD, and viewers will experience the full range during the course of the narrative.

Though BLACKBIRD, by its very nature, was always going to be somewhat unoriginal, it still has much to recommend. The strength of performance from the ensemble is enough to justify its 97-minute running time, and though the subject matter may limit its audience, it is determined, like its lead character, to see its story through to an ending on its own terms.