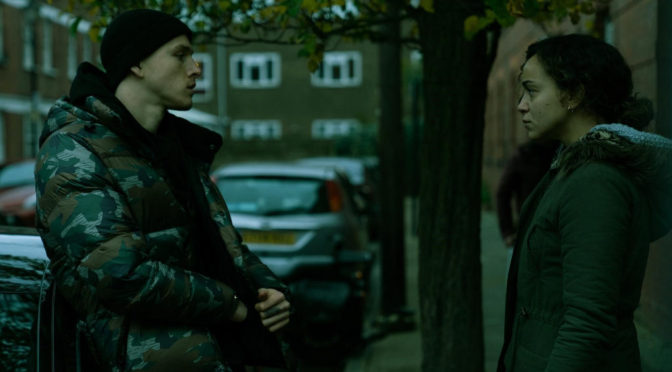 After his mother Toni (Ashley Madekwe) loses her job, fourteen-year-old misfit Tyler (Conrad Khan) sees himself as the man of the house. Desperate to provide for his family, his needs are exploited by a local gangster who employs him to run drugs to a rural town outside of the city – known as a ‘county line’. When a violent war erupts over territory, it will be made clear exactly how expendable and insignificant he is to these ruthless criminals.

‘Because it’s easy’, spits insidious gangster Simon (Harris Dickinson) when confronted by Toni as to why he does what he does, before getting in his flash Mercedes and driving away, another young victim in the passenger seat. According to the post-script at the end of COUNTY LINES, there are currently about 10,000 children as young as twelve are used to traffic drugs to rural areas in the UK by inner-city gangs looking to expand their operations. Coming from broken homes and poor, destitute families, often excluded from schools and with no chance at a future, the children are offered a chance at some quick cash, an outwardly glamourous lifestyle and a chance to belong to something bigger than themselves as a gang-member.

In reality, they are little more than mules for the criminals, described in the film by youth worker Bex (Carlyss Peer) as an ‘acceptable loss’ should they be arrested, attacked or even killed. Writer and director Henry Blake spent eleven years as a youth-worker, dealing with thousands of children just like Tyler, and COUNTY LINES is an encapsulation of his experiences, bringing this urgent, nationwide topic to light as a result.

Make no mistake, though, as the director told the audience at the Cambridge Film Festival screening this year: ‘it’s still a good ride’. COUNTY LINES joins a long, prestigious line of British ‘social-realist’ films that combine spotlighting serious, pressing issues with excellent, visually-striking filmmaking. The film’s grim, bleak subject is befittingly mirrored in the framing and colour palette, stylistically enhanced using various cinematic techniques and a superb original score. That’s not to say the film is totally without humour – there are moments of light in the darkness, although they are appropriately few and far between.

After seeing and reviewing ROCKS (Gavron, 2019), I doubted I would see another performance of Bukky Bakray’s calibre by a young actor this year, let alone at the same film festival days later. Yet here we are, with another teenager carrying a film, present in almost every scene and a lynchpin for its success. Conrad Khan takes on what must have been a difficult, and at times extremely uncomfortable role as Tyler in a largely understated, controlled manner, punctuated by intense bursts of anger and fear. It is a sublime display of acting ability from such a young performer.

In a medium generally restricted to second hand knowledge, and where authenticity usually comes second to story, COUNTY LINES is a rare opportunity to see a work of unfiltered experience taken from years of work on the front lines of social care. This is an important film that highlights a national crisis, and deserves to be seen.

One thought on “County Lines”