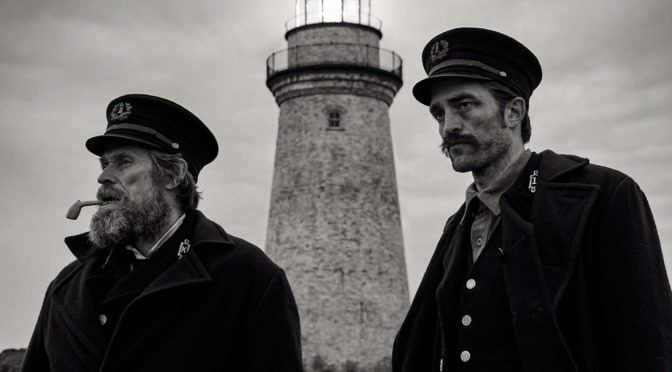 Robert Eggers both amuses and terrifies in this surreal sea shanty, an ode to seclusion and claustrophobia. Co-written with his brother, Max, THE LIGHTHOUSE doesn’t ease audiences into the narrative but traps them there on the island from the start, the camera only ever occasionally pulling away to allow for some respite from the oppressive aspect ratio.

As cabin fever sets in and the two men drink themselves into oblivion the tale takes a hallucinatory and crazed turn, conversations start to resemble fireside ghost stories; Wakes’ sentences comprising of closely strung together allegories and fables. Winslow is put to work but becomes suspicious at Wake’s possessiveness of the light, striking deep jealousy within him. Pattinson, as the unassuming (at least initially) Winslow surpasses all expectations as he slowly begins to give in to the maddening isolation of the island. Pattinson is perhaps at his best here, and he proves his pinpoint comic timing throughout; watching him haul a canister of lighter fluid up some stairs is almost Chaplin-esque and there are touches like this throughout the film, to lighten an otherwise terrifying fever dream in which you’re never quite sure whether you’re awake or asleep.

Eggers has created a hallucinatory and harsh world where just watching makes you feel cold and damp, the whir and clunk of the machinery make up Damian Volpe’s unnerving soundtrack along with the clever use of the lighthouse siren, a warning of something coming ever closer. There’s a constant sense of peril that will have audiences rattled by the end.

In what might be Dafoe’s finest performance, resembling a dishevelled, drunken Captain Birdseye, the Eggers brothers, much like in THE WITCH, have done their homework when it comes to language. Using Herman Melville and Sarah Orne-Jewett as well as sailor’s diaries as inspiration means there’s a wonderful authenticity to every line. Eggers had a monumental task following in footsteps of THE WITCH but clearly we’re all in safe hands here.

Not once does THE LIGHTHOUSE feel stale, complete with fart jokes, seagull attacks and some hilarious drunken moments between Winslow and Wake, a film, that could be in danger of isolating some audience members has managed to still keep itself connected.