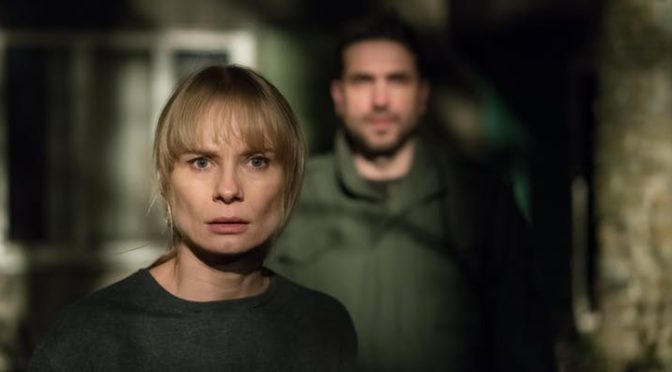 DARK, ALMOST NIGHT follows Alicja Tabor (Magdalena Cielecka), a journalist who returns to her hometown to investigate the disappearances of young children. Whilst on her assignment, painful memories of her childhood are brought to the surface and the dark secrets of the town are dragged out.

The simplicity of this plot summary presents the film as entertainingly dark, and it certainly has moments that are. Some additional moments of great directorial triumph are scattered throughout but as the film progresses, it becomes disturbing due to the continual use of child abuse in the plot which edges it towards offensive instead of entertaining.

Borys Lankosz’s film could be great: utilising film noir aesthetics to create extremely tense scenes, the film propagates the plot further by the expectation of what happens next instead of paying great detail to each moment as it occurs. This is evident from the outset of the film as Alicja travels on a train to a dark village to an isolated, empty house. The lack of dialogue, the dark surroundings, and soundtrack stir tension in the viewer as Lankosz uses conventions of film noir and thriller genres to toy with the audience. As the film continues, the viewer becomes tense and the emotional stakes in each scene are heightened.

This tension makes for interesting viewing, however, Lankosz’s film fails because of the choice to gratuitously use child sexual abuse as characterisation. Although the film is never exceptionally graphic, the suggestivity and camera angles that hide the child but show the abuser are upsetting and do as much damage as if the act had been shown in full. A (potentially triggering) example of this is when the mother of the Alicja’s sister presents herself naked to the child and pushes the child towards her genitalia. The camera stops at the mother’s waist, however, the audience is already aware of the events that are unfolding and this disturbingly uncomfortable information. This scene, and it is not alone, does not appear to add to the plot in any great way and, therefore, appears to be used to shock the viewer or to make the film particularly dark. The lack of resolution for the majority of characters or storylines involved in these scenes is also never dealt with in any conscious way, further adding to the theory that these scenes were for shock factor. Child abuse is painful for viewers and should not be used without great consideration, particularly if it is not central to the plot.

Borys Lankosz’s use of genre conventions to create tension and the use of film noir aesthetics is notably effective. The central plot was interesting and appeared to be resolved, however, the introduction of multiple character backstories and the theme of child sexual abuse diluted any real semblance of a coherent storyline, diverting attention away from any of the film’s triumphs. DARK, ALMOST NIGHT is not a bad film but it is a film that crossed the line and hurt itself in the process.