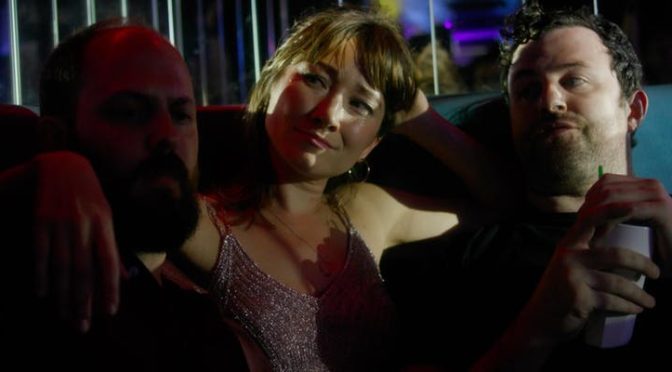 Emmy (Sarah Oven) struggles with her impending marriage to Samantha (Eleanor Fanyinka). Her brother Josh (Owen Roberts) is reeling from the revelation that his girlfriend of five years has been sleeping with other people. Niall (Ciarán Dowd) – Josh’s roommate – wanders aimlessly from one fling to another. The four friends navigate the tests and trials of mastering love in the modern world.

Official selection at Raindance 2019, MASTERS OF LOVE is most certainly a story we’ve seen before. A group of middle-class Londoners negotiating their way through relationships – albeit updated to include Tinder – was a bit old-hat even in the nineties, wasn’t it? Well, yes. But that is part of what makes this charming, slightly dark, richly entertaining film so impressive.

Shot in classic sitcom fashion (although at more inventive, interesting positions than your average Friends episode) with the camera set-back, stationary and rolling through long takes, this allows the natural, effortless chemistry of the cast to shine through. At the Q&A after the screening at Raindance, the cast ascribed this natural synergy between them as a combination of prior friendships and the comfort that brought, along with a huge amount of rehearsal and work-shopping of the characters with feature-debut director Matt Roberts leading up to the shoot. It stands out – the dynamic between them feels real and organic.

As are the characters themselves. Each of the group (plus many of the secondaries) are relatable and authentic – you will know each of these people in some shape or form in reality. Sarah Ovens is delightful as the kooky, artsy photographer Emmy, desperate not to grow up. Owen Roberts the droll, semi-sophisticated, recently heartbroken Josh – contrasted with his online alter-ego as a manic food-critic vlogger. Ciarán Dowd is the nihilistic stand-up comic Niall, alternating between his poorly attended, decidedly mediocre gigs and his often cringe-inducingly awkward sexual encounters, to great comedic effect. Eleanor Fanyinka has the less amusing, though no less important role as ‘serious-grown-up-with-a-proper-job’ Sam, trying her best to drag her friends and fiancé kicking and screaming into adulthood with her. Each performance is excellent in its own right – there’s no standout here – a genuine ensemble.

Most surprising, given the authentic nature of the characters and their interactions, is that there was little to no improvisation in the film. There simply wasn’t time for it during the tight two-week shoot, explained the director. For such a natural feel to come direct from the screenplay speaks very highly of Matt Roberts’ ability as a writer and director. Here, he showcases a real talent for dialogue, character and situational comedy.

MASTERS OF LOVE could so easily have been FOUR WEDDINGS AND A FUNERAL rehashed for millennials. The incredible thing is that it hardly feels that way at all. Here is solid proof that, even with a concept as well-trodden and seemingly passé as this, when a group of talented people comes together with the right energy and intentions, they can create something that feels fresh and original.