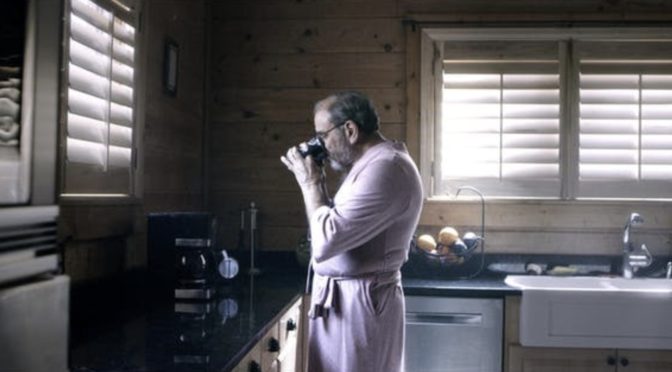 In a story inspired by real events, recent divorcee Kate (Lori Katz) hires local craftsman Howard (David Raizor) to work on her house. Eccentric but charming, initially Kate warms to the older man, but soon his behaviour becomes intrusive and erratic. Events spiral out of control and Kate finds herself in a tense battle of wills, trapped in an unending nightmare as Howard’s true motives become clearer.

On the surface, SANDPAPER is a psychological drama, but in reality, this is a horror in the keenest sense of the word. Every home-owner will watch on the edge of their seats, teeth gritted and palms sweating, as this literally too-close-to-home narrative unfolds. This is a story largely without violence or threat in any traditional sense, but it cuts so close to the bone as to be terrifying.

All the filmmaking tricks are at play here from the very beginning in order to achieve this, even where there is seemingly nothing to fear. Dutch angles, tight framing of the two characters, an eerie soundtrack and jarring edits create a sense of unease and claustrophobia from the outset. Together with David Raizor’s understated weirdness and the (intentionally) stilted, often awkward, dialogue this is a film in which an audience may find it very difficult to sit comfortably.

Truly, this is Raizor’s film. Lori Katz is undoubtedly solid as the increasingly frustrated and agitated Kate, but it is the magnificently strange Howard that carries the film. The transition from offbeat courtly southern gent to raging, unadulterated psychopath is taken without missing a beat, ably assisted by the techniques mentioned before. Raizor’s Howard oozes such menace at times, and abashed bewilderment at others. So much so that it is decidedly unclear whether Howard is a brilliant, Machiavellian con-man or a naïve, confused old man who doesn’t understand boundaries. Raizor treads the razor-thin line between the two perfectly.

With all the insidious build-up of tension, it might be expected that the film would contain an inevitable, violent explosion as it reaches its climax. The film never provides such a release, however. Instead, the film rather peters out – Howard’s smothering spectre lingering oppressively like a bad odour. This is, if anything, even more unsettling. That sense of dread that persists throughout the film simply continues until the credits roll, denying us any kind of relief. It may even remain long after the film ends. Much like JAWS did for sharks, SANDPAPER may result in many viewers desisting from inviting their handymen inside for a cup of tea for a long while.

SANDPAPER is a taught, tense, uncomfortable, nails-on-a-chalkboard type of film that will bring to life many people’s fears in a fashion that is all too real. It is also a tight, well-paced, excellently executed example of psychological horror with a fantastic performance at its core. Maybe give it a wide berth if you are trying to sell your house – otherwise, you won’t be disappointed.