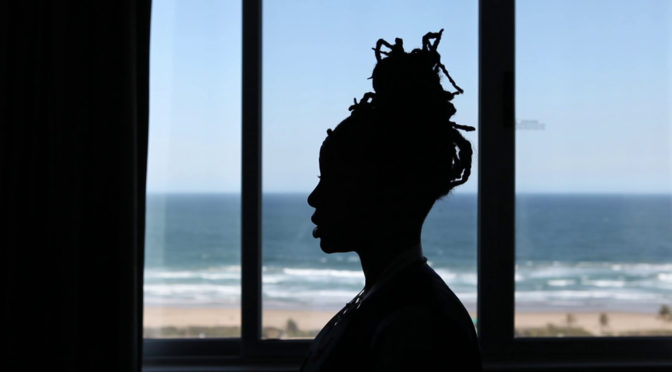 Fanon, an African filmmaker, arrives at Durban International Film Festival anxious, but determined to pitch her debut feature film: a documentary on Marike de Klerk, former first lady of South Africa, and wife of President and Nobel Peace Prize winner Frederik de Klerk. Marike, at the forefront of the Woman’s Outreach Foundation, passionate about directing women toward politics and a politician in her own right, was tragically murdered in 2001.

The subject of Fanon’s documentary, however, isn’t the real focus here. Right away, Fanon presents her frustrations with the industry and the way that the number of black people, and black women especially, producing, pitching and directing film is inexcusably low, in South Africa and internationally. The people behind the cameras, telling the stories of black lives, are white people. “White people telling stories about black people is seen as normal”, says Fanon. Following a screening she asks, “why was this made?” Specifically, she wants to know: why was this made by a white woman? Why are black women struggling so hard to tell their own stories? Fanon’s already shaken confidence begins to wane further as the festival scene amplifies her fears of being unheard in a whitewashed, male-dominated industry.

Alongside Fanon’s own struggle, we’re introduced to a variety of talking heads giving their opinions on the South African film industry; the lack of funding in South Africa for filmmaking and recent harassment claims in the industry has shone a negative light on an industry that’s still trying to establish itself. But what we’re seeing, what Fanon is seeing, is no different than the film industries worldwide; the people who are making and directing new South African Cinema are the same.

There’s a profound and honest core running through FILM FESTIVAL FILM. Audiences will be left questioning why and how certain stories are told, and challenging the reasoning behind them. In this new generation, post-Apartheid, black South Africans are struggling to add voices to their own narratives, Fanon is just one example of tireless attempts at breaking through into the film industry as a black woman.