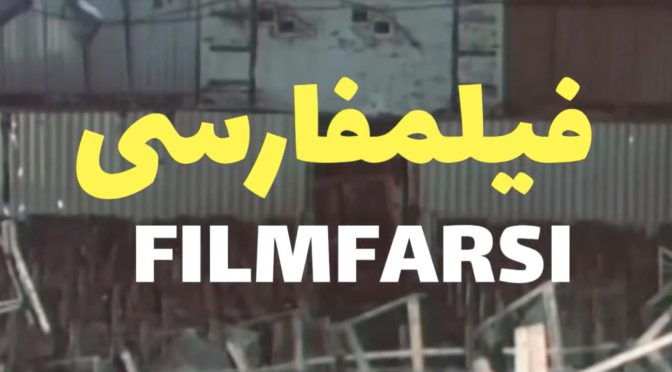 Toby Miller sat down to speak with Ehsan Khoshbakht, the director of FILMFARSI: his documentary essay collecting wide ande differing examples of ‘filmfarsi’. The cinema of Iran prior to the Revolution, FILMFARSI offers a fascinating insight into the cinema of Iran under the Shah.

Toby Miller: How did you decide to shine a light on the movies of Filmfarsi?

Ehsan Khoshbakht: Before I began my career in writing and working on film, my background was in architecture and urban design, and it was this background that actually initiated the Filmfarsi project. I decided to look at the use of modern architecture in Iranian popular films from before the Revolution. As I began to watch this period of Iranian cinema I realised that people outside Iran really didn’t know much about them.

TM: And where does the term Filmfarsi originate from?

EHSAN: Filmfarsi was coined by one man in 1953 – the same the year as the coup.
Amir Houshang Kavousi – educated in France and very interested in Art-house cinema – came up with term knowing that in Persian if you merge two words the result, as with Filmfarsi, is something that means neither Film nor Farsi (Persian). So it was a derogatory description by somebody who saw themselves as an enemy of Iranian popular cinema.

But what I try to do in my documentary is show that the word today couldn’t be something entirely negative. What began as a way to make fun of Iranian commercial filmmakers is now rather something which describes a cinema which ran parallel to the Iranian art-house cinema we know as the New Wave.

EHSAN: Exactly. And I can add two things. First of all Filmfarsi continued after the revolution, but without sex, and Filmfarsi without sex is like Westerns without horses and pistols. The second thing that I can add is that the dates – 1953 to 1979 – are very significant. I made Filmfarsi as a film about the idea of being Iranian and the Iranian way of life from 1953 to 1979. And I use the Iranian popular cinema as a means to tell that story. That gave me a very good narrative arc because you have these two very significant social and political moments in Iranian history, the coup and then the revolution. And you can look at the people between these two extremes, how they live, how do they do things, how they react to the changes in Iranian society, and how the optimism of the pre-1953 turns into something pessimistic. And again towards the revolution, things become darker and much more violent. So you could also say that Filmfarsi is the story of Iran between 53 to 79.

TM: And was Filmfarsi documenting or was it commentating on the on the country’s change? Was it a passive onlooker, or was it helping to drive change?

EHSAN: It’s a hard question to answer, because the majority of Filmfarsi products were so sloppy and poorly made that expecting something from them, either being passive or active, is just too much. They were made for making quick money, basically. But exactly because of that, because there was no plan and they were improvised, in the process things were creeping in. Because the film was so low budget, you have to put the camera on the street, you could see the street! Because the film was so badly written that they had to improvise on the set, the actor could have spoken a line which was the latest slang. So that gives a sense of life to Filmfarsi, it makes them a documentation of Iranian society at a time. Of course, as the films became more technically sophisticated, and with the arrival of some directors who had studied in the West, there was a sort of social commentary added to some of the Filmfarsi films, so in a sense both was true.

TM: What was the cinema going landscape like it during those years before the revolution? Was it a hugely popular pastime?

EHSAN: Cinema was immensely popular; I would say it was the number one entertainment in the country. Film arrived in Iran around the same time as other countries, in the late 19th century / early 20th century, so going to the movies was part of the culture.

And television was not that strong, not even in in the 50s and 60s. In fact, there is a scene in my documentary where I mentioned television and I needed a shot of Iranians watching television. Out of something like 1000 Iranian films, myself and others could not find a single shot of people watching TV. And that tells us that television was just not important in Iranian life. It was too expensive. The majority of people didn’t have it until after the revolution. Also Iranians rejected the official version of Iran, which was shown on Iranian television, which was a national TV. So Filmfarsi was also a reaction to the image that the pre-Revolution Pahlavi regime was creating.

TM: Your documentary is knitted together from clips of nearly 100 Iranian films, how did you begin gathering the clips and what were your main sources? How easy was it to begin collecting?

EHSAN: It was very difficult. Extremely difficult, especially in the 1990s when I was very young and I wanted to see these films. Of course it was illegal, and it was scary to exchange VHS tapes of these films. But then the very same VHS tapes became the main source for creating this film because they were still the only way to see the movies of filmfarsi.

There is a very interesting story about how these films were seen. The end of the Pahlavi era coincided with the beginning of the home video, and some of filmfarsi films were telecined to VHS. Then with the Revolution, many Iranians migrated to the United States, with California becoming one of the main destinations. They, of course, began to miss their homeland, and some American companies accessed the Iranian VHS tapes and made copies that they’d sell in LA supermarkets. These tapes then began to circulate around and ended up back in Iran, and it’s these tapes that are mostly my material for creating Filmfarsi.

I also coined a term for this film: ‘VHS-Scope’ , because so much came from VHS, and it was also my way of paying tribute to this format which was essential in my understanding of film history and, and the only way I could see film heritage in my own room.

TM: At the beginning of your documentary you have a low opinion of Filmfarsi; You describe them as being several letters below a B movie. But did your opinion on maybe not the quality of the film, but the importance of the films shift as you gathered the clips and your documentary began to take shape.

EHSAN: That’s 100% true. That’s what happened. My documentary was made during a period of four years, and my ideas and my relationship with the film was shifting.
But because I didn’t want to start my documentary from scratch I let that shift of mood and attitude shows itself in the film.

The first major event that changed my attitude was when I screened a much longer, work-in-progress version of the film in Copenhagen. I made my introduction and said something like, “Oh, these films are not very good”. And then after the screening, one guy said, “But these films they look wonderful, why are you criticizing them?”. That was the moment I realised that you know from the view of non-Iranians these films have many interesting things going on. Then I organized a retrospective on Samuel Khachihian, an Iranian Armenian who, in my opinion, is the best of the Iranian pre-Revolutionary popular directors. I programmed four of his film noirs from the 1950s and 60s in Bologna and it was a revelation. It was pure joy to see those films for the first time in decent prints, on a big screen and in a full cinema. It showed how cinematically rich these films were. How much love for cinema could be seen in them.

TM: Often our view of a country is shaped by its cinema. For years now the only Iranian cinema we see has been the complex drama of films such as A Separation or Ava – great films, but rather forbidding to a more casual cinema-goer. Does Filmfarsi offer a useful corrective to this rather austere view?

EHSAN: It definitely does. I’m kind of tired of the lazy labelling of Iranian cinema as the cinema of poetry. Like any other nation Iranians are interested in good food, sex, laughter; the basic pleasures, and the majority of their films are about that. But also the fact that the origins of Iranian arthouse cinema are in Iranian popular cinema. Abbas Kiarostami was designing the title sequence for Iranian popular films in the 60s. Daruish Mehrjui, who made The Cow in 1969, which was seen as the beginning of the Iranian New Wave – his very first film was a James Bond spoof called Diamond 33.

So if you want to see the whole spectrum of Iranian life, Filmfarsi should be part of the picture. But also, if your interest is in Iranian art-house cinema, still going back to watch some Filmfarsi is the natural way to start your investigation.

TM: How have Iranian viewers responded to the film?

EHSAN: One of the funny things about showing this film around is the reactions from Iranian audiences. It’s a combination of pure nostalgia — you can hear the whispers, you can hear some of the parents whispering in the ears of their children about how the actress on screen was a big star once upon a time. But at the same time there’s a sense of discomfort because these images are sometimes not very flattering. You see yourself on the screen and it’s not very easy to look at it, or share that world with non-Iranians. And then there are the audience members who dislike my arguments in the film, and who are offended that I had put directors such as Masoud Kimiai under the umbrella of Filmfarsi.