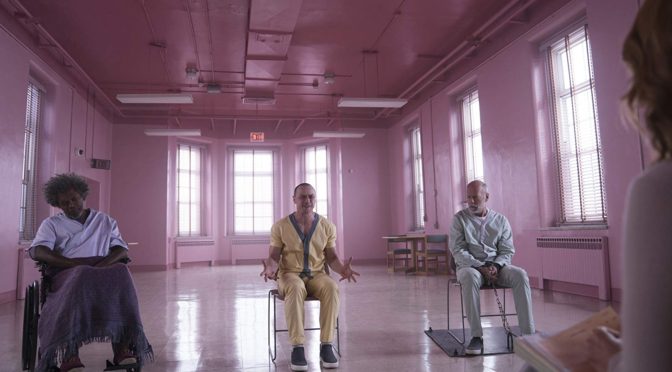 GLASS, released in UK cinemas recently, sees director M. Night Shyamalan attempt to resolve the stories of previous outings (UNBREAKABLE and SPLIT) within a shared sequel. Like many shared-universe stories, GLASS features a cast of characters who believe they have superpowers. But unlike the Avengers, these people face a central existential dilemma: are they truly special? Or just delusional?

M. Night Shyamalan has had a chequered career. Although once hailed as an up-and-coming visionary for films such as THE SIXTH SENSE and UNBREAKABLE, his directorial outings since then have seen him repeatedly blot his copybook. While THE HAPPENING and THE LADY IN THE WATER should both receive honourable mentions, the director’s most heinous crime is probably his depressingly awful live-action adaptation of AVATAR: THE LAST AIRBENDER. This humourless outing is notable only for its nice shooting locations, strangely whitewashed cast, and ability to suck all the joy out of one of the most well-loved television series of all time. Suffice to say, it horrified fans and critics alike. After the financial failure of sci-fi thriller AFTER EARTH, it is little wonder that Shyamalan began to rely on self-funding his pictures, rather than attempting to woo studios.

His last three films (THE VISIT, SPLIT, GLASS) have been self-funded for $5-20 million. With excellent financial returns, and GLASS going in at the UK number one in its opening week, it’s a strategy that has met with more than moderate success. If you do happen to have $20 million lying around, self-funding is also attractive for reasons beyond the financial. As a director, M. Night Shyamalan now has far greater freedom to exercise his artistic vision, selling GLASS and his other films to distributors after he has signed off on the finished product, with little chance of ‘studio meddling.’ Whether we appreciate his artistic vision is another matter.

It would be impossible to discuss GLASS without mentioning its parent films. UNBREAKABLE, viewed in some circles as Shyamalan’s best work, introduced us to David Dunn (Bruce Willis), who is contacted by comic book expert Elijah Price (Samuel L. Jackson) after he is the only person to survive a terrible train wreck. Elijah believes that David is ‘unbreakable’ – effectively, a superhero – and the film follows David as he struggles with the truth of his identity. The second film, SPLIT follows Kevin Wendell Crumb (James McAvoy), a man whose body plays host to multiple different personalities. While most of his personalities are benign, others wish to bring forth a final, animalistic personality known as ‘The Beast,’ whom they believe to possess supernatural strength and speed. GLASS acts as a shared sequel, set 19 years after UNBREAKABLE and a mere three weeks after the events of SPLIT. As you would expect from this lopsided history, GLASS is a Frankenstein’s monster of a movie – often fun, occasionally tedious, but ultimately a worthy sequel to both its progenitors.

Naturally the film has its problems. It is likely that viewers who have missed either of the previous outings will find large parts of GLASS incomprehensible. It makes no bones about its sequel status, instead going out of its way to refer back to both parent films with an attention to detail which will reward fans but may alienate the casual viewer. It’s also difficult to classify GLASS by genre. Those expecting a standard superhero-action flick will be disappointed. Fight scenes have never been Shyamalan’s strong suit (see THE LAST AIRBENDER – or rather, don’t), and he doesn’t overuse them here. Although not as glacial as the sometimes-leaden UNBREAKABLE, the pacing is also characteristically slow, only gearing up in the final act. In short, those unfamiliar with Shyamalan’s body of work will find this a very difficult sell.

But despite these issues, GLASS represents a successful melding of its two parent films, preserving their strengths and, more often than not, shedding their weaknesses. Though spun from interesting ideas, UNBREAKABLE is undeniably a film somewhat devoid of fun. In contrast, these self-aware themes come to enjoyable fruition in GLASS, with Elijah (Jackson) narrating his own film like the anthropomorphic personification of the TV Tropes website (“Assemble the main characters!”). While staying true to these fun ideas, the film also moves its focus away from the heroic but passive Dunn (Willis), and onto the more dynamic players. It benefits here from a game cast, with James McAvoy (ATONEMENT, X-MEN: FIRST CLASS) deserving special mention. As the multiple personalities of Kevin Wendell Crumb, he has the most challenging (and bonkers) role, and he not only commits but rather steals the show. His believable chemistry with Anya Taylor-Joy (THE WITCH) as Casey, a former victim, also cements him as by far the most sympathetic of the central three characters.

For those along for the ride, GLASS is good B-movie fun. It may have been made for the fans – but this isn’t always a bad thing. Shyamalan’s latest outing is true to the philosophy and logic of UNBREAKABLE, but is leavened by watchable performances and an enjoyably insane finale. Just don’t expect any skybeams.

One thought on “Glass”