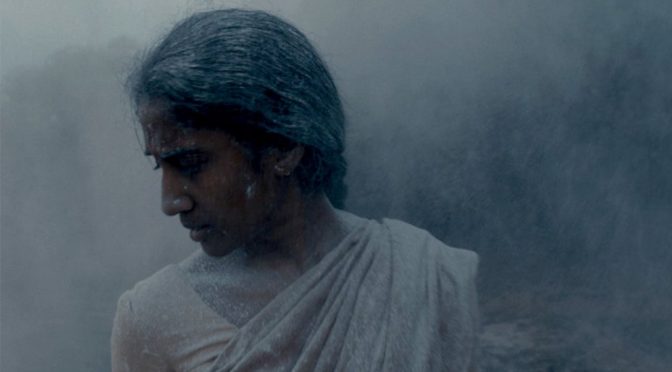 HOUSE OF MY FATHERS is part of the 48th International Film Festival of Rotterdam’s Bright Future section, and it couldn’t be a more accurate categorisation. In her first feature, Suba Sivakumaran delivers a moving story of two warring villages, one Tamil and the other Singhalese. Both communities are suddenly hit with a curse which prevents all the women from conceiving. Fearing for their legacies, the leaders of the two villages listen to their priests and send Asoka (Bimal Jayakodi) and Ahalya (Pradeepa) on a journey through the Forest of Death, accompanied by the Strange Doctor (Steve De La Zilwa) as a neutral party. On a snowy day in Rotterdam, Yemi Chabi had coffee with director Suba and asked her about the film.

Yemi Chabi: From what I gather, you are mainly an aid worker, right?

Suba Sivakumaran: Yes, that’s my day job! I studied political science and public policy at an undergraduate and graduate level and then joined the UN for 8 years. Now I work in development and aid work through a private firm working mainly for the British government.

YC: How did you get into film?

SS: I knew that I wanted to be a filmmaker since I was 15 but that was never an avenue to explore due to my upbringing, the norms around it you know. It was not seen as something acceptable to do. I also didn’t quite know how to enter that world, I didn’t know anyone in film. But when I got to 30, I thought, you know, I really need to do this. So I assisted on a short film and then made my own. After that I knew that this was what I was meant to do.

YC: What was your first short about?

SS: It’s called I TOO HAVE A NAME and it’s about a nun and a girl in eastern Sri Lanka during the war and their relationship as the war unfolds around them.

YC: I’d like to talk about how you came about this project, HOUSE OF MY FATHERS. What was the genesis for this film?

SS: I lived as an aid worker in Sri Lanka after the tsunami for a few years and when I was there I went up and down the country, over 150 villages, whether they were Singhala, Tamil, Muslim, and I really saw the differences in my country. I wanted to write a film about the past and about how we’ve all experienced it for a long time but the way was not so clear.

YC: Why did you tackle the subject by writing a fairy tale like story?

SS: I didn’t want to make a documentary or a historical drama. Being Sri Lankan, you grow up with a lot of myths, superstitions and ritual practices. For example, the forest is a place where you bury the dead, the forest is also a place where you are exiled to and in which things happen to you. There’s no clear answer to how the idea came about, it just happened to come up as an allegory in which I really wanted to remove identifying details.

YC: What really pushed you to make this film? Was it more a personal project or did it feel like a duty towards your homeland?

SS: I felt like I had no choice but to write this story once it came to me. It was a process that was both painful and difficult. I wish I had another story, like a happy romantic comedy instead. I mean I spent 5 years of my life writing this!

YC: That must have opened up terrible wounds.

SS: It did! It was just difficult for everybody involved and I think we all felt like we had to do this film.

YC: I can only imagine. What I find amazing about this film is that even if people, like myself, don’t know much or anything about Sri Lankan history, they still get to witness a beautiful and moving tale. However, just for our readers, could you briefly go over this history and how the allegory works within your film?

SS: Even nowadays, a lot of Sri Lankans don’t know the full version of history because we have different languages, different medias. We didn’t know what was happening in the South, they didn’t know what was happening in the North. So, we needed to make the story reachable. I think in a war, when it ends militarily, that means that only one side wins. And in the same way, the film establishes that the solution to the ongoing problem is that only one of the main characters can come back alive from their journey. Our 20 years long war is represented by this allegory. There are loads of other symbols but that’s too long to get into!

YC: Of course, history can be a rabbit hole, better not get too deep into it! In a few words, the film deals with a war and the end of this war. Yet the ending is really bitter sweet and quite open, one doesn’t really know how future events will unfold. Obviously, we can’t predict the future. While writing, was there a moment when you wanted the film to finish on a purely positive note or did you want to keep that stark reality of utter uncertainty?

SS: That’s a very difficult question to answer. I think one has to remain true to the characters and when there has been so much violence in the past, you can’t change overnight. You can only change if there’s a great deal of reckoning with that past, a great deal of honesty and truth within yourself and that extends to all of us in Sri Lanka. Without that, you can’t move forward.

YC: I’d like to talk about the character of the Strange Doctor. You have said in your Q&A last night that he represents Norway’s role within the war as peace mediator. He’s a secondary character but he’s absolutely essential. He’s the one who is initially thought as the bearer of solution, he accompanies the two lead on this magical journey… I won’t say too much for our readers. When writing did you ever feel that you were giving this character too much importance?

SS: That’s a very good question, very observant. It is indeed thanks to him that this story is alive. We learn in the beginning that he is the one who told it to the narrator. It was quite difficult to keep a balance but he was crucial to say that Sri Lanka is not a closed country. Outsiders, whether it has been the Dutch, the Portuguese, the British, have come back and forth, colonising us. People came in and out from Sri Lanka. That dialogue with the outside world is an important part of any country. Of course, we shouldn’t give a primacy to that voice but it is still part of our history and our future.

YC: Let’s move onto your directorial process. Did you stick to your script or did something change once you started to shoot on location?

SS: I stuck to the script. Of course, there were minor improvisations with dialogue and it was impossible not to be driven by the location. We shot the whole script but the magic really happened during the editing. I had two and half years of editing!

YC: I’m not sure I want to picture that…

SS: It was originally a 3 hours and 10 minutes long film.

YC: You basically cut it in half!

SS: Exactly! This is my first film and I later understood that I initially planned a much more complex retelling of our history. I definitely learned a lot about film language in those two and a half years.

YC: Incredible, and you shot everything on location in Sri Lanka – that must have been challenging too, right?

SS: Yes, but I think that it gave a great deal of authenticity to the story that I wanted to tell. Everybody, cast and crew, felt that they were doing something meaningful. But of course, shooting in a jungle wasn’t easy. I mean, 30 days in 37 degrees heat! There were herds of elephants nearby, they even destroyed a set overnight. Then there were snakes, bugs, red ants near the trees that bit the actors to pieces during a scene!

YC: That must have been a surreal experience!

SS: Yeah, it was real physical challenge! I feel like I could write another version of APOCALYPSE NOW.

“I think that the screen and the film is all about presence, it’s all about the sincerity of emotion…”

YC: People must have tried to stop you too, given Sri Lanka’s current political situation.

SS: There will always be people that try to stop you from doing what you’re doing. People have tried to prevent us from shooting, they always tried to find different ways and means to deter you.

YC: Let’s move onto the actors. How did you go about the casting process?

SS: Well I always knew that I wanted Bimal Jayakodi for Asoka’s role. I was really grateful when he agreed to work with me because he’s a respectable and well-established actor. He immediately understood the story and said yes. Whereas for the female lead, for Ahalya’s role, it was a great challenge. I searched for about a year but couldn’t find anyone with the right face. Then I met Pradeepa, who’s initially a producer based in LA of all places. She wanted to help me with the filmmaking. I was having a drink with her one evening and I suddenly looked at her and just said “You’re gonna be my actress!”.

SS: I know, she refused at first. She had never acted before, she said “No, no, I can’t do it!” but I pursued her for about 6 months and she eventually agreed. I couldn’t have asked for a better person, she did such a great job.

YC: Absolutely, I mean Bimal and Pradeepa have amazing chemistry!

SS: They do, I was very lucky. I saw it when we were doing rehearsals. Film can instantly tell you when it’s now there.

YC: I find it incredible, we’re really seeing the rise of non-actors lately.

SS: I think that the screen and the film is all about presence, it’s all about the sincerity of emotion. Sometimes, not always, non-actors are much more natural on screen. I think it is difficult to work with non-actors, you know, mainly for the technical departments because they don’t know how things work on a film set. But it’s definitely a challenge worth taking!

YC: Last but not least, I’d like to talk about the title, HOUSE OF MY FATHERS. It implies that motherhood has been stripped away, almost eradicated. Why so?

SS: We can all look back and see that there were two fathers that gave birth to this violence, one on each side and now we all live in their house. Another part of that is, where have the women been in this house? Sure, there is historic gender oppression and historic ways of silencing women, that’s true, but women have also accepted those rules. Of course, there is the exceptional female group of activists but most women have accepted a silent role within this war. By doing so, they have become agents of war. I guess it’s a criticism of men and women, fathers and mothers.