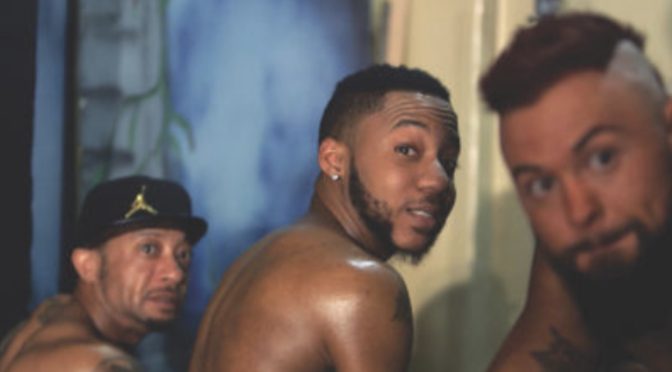 Trans people are often subjected to being the topic of tense debate, in the political sphere and on a personal level. Their identity, their appearance, their life choices and everything in between feels up for grabs; to be dissected. So, it is refreshing and necessary for a documentary, created by a trans person, to give an intimate space for trans people to discuss their life and their journey to living as their true selves. MAN MADE by T Cooper is one such documentary. The film follows four trans men on their path to competing at Trans FitCon, the only all-transgender bodybuilding competition in the world, and details their own personal struggles through their transition.

One of the most notable aspects of MAN MADE is the very obvious presence of T Cooper in the film, whether that be when he was on-screen or being mentioned by one of the men. Documentary directors can often be an invisible element of the film, however, Cooper chose to be visible and this pays off. One powerful example of his presence in the film is during Dominic’s first moments of seeing himself after his double mastectomy. The scene is incredibly emotional for the viewer as they see Dominic cry with joy, but what is shown afterwards adds to this beautiful moment. Cooper is outside filming himself, he has tears falling down his cheeks and his voice is cracking. He expresses how unprepared he was for how emotional the moment would be ‘seeing him, seeing himself’. Cooper sums up in those four words why this scene was so important. The cut to the shaky footage of Cooper makes a point of showing the viewer that the director is emotionally involved in this film and is experiencing the journeys of the trans men intensely.

Another memorable feature of the film is its inclusion of quick shots overlayed with music showing moments of happiness or sadness. Two examples that highlight how successful these uses of quickly successive shots is during Kennie’s ‘It’s a Boy’ party and behind the scenes at TransFit Con. During Kennie’s party, there are multiple shots of Kennie and loved ones smiling and laughing. These show the true amount of love that surrounds him and how excited he, and his loved ones, are for the start of his testosterone treatment. During TransFit Con, there are multiple shots of the men backstage preparing to perform or watching the results. They are subtle and show how relaxed the men are around each other. The use of this technique is to show private moments and true emotion. Their use is important and gives a further insight to the men but in a way that does not feel invasive.

MAN MADE is not just a documentary; it is a film made by a trans man showing trans men, and is an example of true representation. T Cooper creates spaces for trans men to tell their story for themselves. The viewer is given an insight into the men’s terms and they are not a voyeur but a guest. This unique viewership is due to the great care taken by T Cooper and his intelligent filmmaking. MAN MADE is a beautiful representation of trans men and should be essential viewing this festival season and beyond.

MAN MADE screens at SQIFF 2019, in association with LEAP Sports Scotland, on October 3rd at the CCA Glasgow, 6.15pm.