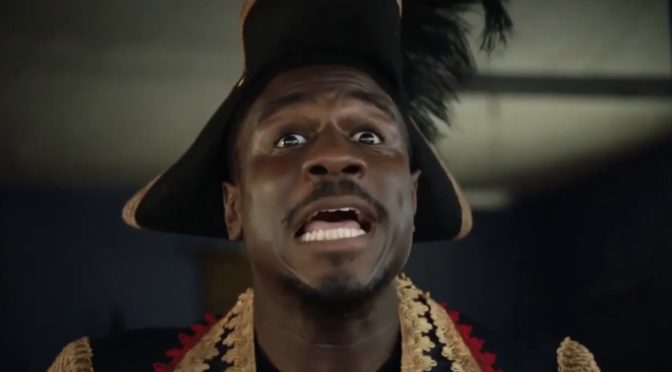 It is easy to assume, in our ‘post-truth’ age, that reality has overtaken satire. This, of course, is untrue – pricking the absurdity and hypocrisy of those in power and privilege is the cornerstone of satire and there has never been more material. In a way then, arch-satirist Chris Morris’s latest film – in recalling his old work – is oddly backwards-looking on the surface. Once again it is centred on terrorist farce: the FOUR LIONS were incompetent; here The Star of Six group are merely fake (or least artificially amped up). However, underneath THE DAY SHALL COME is a wider-ranging set of issues – as a result each is prodded rather than skewered. Morris’s work is just as witty here; but maybe he isn’t angry these days, he’s just sad and disappointed.

The film follows Marchánt Davis as Moses, the leader of hilariously small cult The Star of Six, which runs a ‘farm’ from a small house in Miami. Moses preaches the overthrow of the government, but without the use of guns. He and his band of three disciples long for the days when the “cranes of the gentrificators” come falling down. The FBI, reeling from a screw-up in trying to pin a failed attack on local terrorist cell, are looking for an easy win. Kendra (Anna Kendrick) coordinates an effort to furnish Moses with tools required to entrap him and his comrades; her attempts to move up the greasy federal pole are hampered by not only Moses’s naivety but a misogynistic lack of respect from her entirely male peers.

“Throughout the film, various figures – in an absurdist form familiar to fans of Morris and co-writer Jesse Armstrong – vie to exploit Moses’s desperation for their own ends.”

From the outset Moses is presented as a struggling and downtrodden individual, trying as best as he can to provide for his family along with his wife Venus (Danielle Brooks). From their opening sequence we know they are under threat of eviction, as the creeping spread of gentrification is soon to render them homeless. His revolutionary delusions are a very vocal form of benign, and it is only once the federal authorities become involved that anything escalates. Throughout the film, various figures – in an absurdist form familiar to fans of Morris and co-writer Jesse Armstrong – vie to exploit Moses’s desperation for their own ends. The authorities require a bogeyman, and they are all too willing to fill that role with people unable to stop them and have little to no agency in their fate.

The shared heritage the film holds with IN THE LOOP feels appropriate (Morris’s co-writers have all worked on that, The Thick of It and Armstrong’s HBO show Succession; Veep has been directed by Morris on several occasions). Armando Ianucci’s 2009 film took the formula of satirical mockery of a minor government department – The Thick of It – and extrapolated it to international consequences of a Middle East war. The same petty office politics and people failing upwards are at play in the FBI of THE DAY SHALL COME, but the stakes are extrapolated from low level hypocrisy and self-interest to the perpetuation of institutional-level systemic disadvantage.

“The result is a satire that is less fierce and more in keeping with Armstrong’s work than Morris’s. A notable feature of Succession, in particular, is the sadness and disappointment it approaches its powerful characters with.”

The result is a satire that is less fierce and more in keeping with Armstrong’s work than Morris’s. A notable feature of Succession, in particular, is the sadness and disappointment it approaches its powerful characters with. The humour underlines the stakes, as the gambling is undertaken by powerful but intensely flawed human beings: if you don’t laugh, you’ll cry. Previous work, including FOUR LIONS, has swung more towards pricking the seriousness of a topic by laughing at the absurdity and incompetence of those involved.

There are plenty of over-the-top flourishes, and some jokes at the expense of Moses are forgivable on account the palpable empathy the script has for him and his family. A late instance, highlighting the extent to which Moses has been exploited and let down by the system, generates a heartbreaking pathos. There is a palpable sadness at this throughout the film, initiated in an early face-to-face between Kendra and Moses. Moses, the desperate individual looking for aid, seeks help from Kendra, the authority figure who makes all the correct statements about “communities” and looking out for people. In reality, however, she is humouring him – batting him away because his problems are inconvenient to the agenda.

“The film isn’t on a perfect footing, and in particular skirts dangerously close to treating modern black radicalism with the same seriousness as the new media idiocy of Morris’s TV comedy Nathan Barley.”

The film isn’t on a perfect footing, and in particular skirts dangerously close to treating modern black radicalism with the same seriousness as the new media idiocy of Morris’s TV comedy Nathan Barley. However, in one spiralling tragicomedy Morris and his collaborators take on systemic racism in the USA, the effects of gentrification, compassion for mental health issues, and fires a renewed barb at the legacy of the War on Terror.

THE DAY SHALL COME presents a character that longs for change. Although the issues are prodded rather than skewered, the film develops a sadness at the absurdity and lack of empathy that perpetuates a status quo with an expensive human cost.