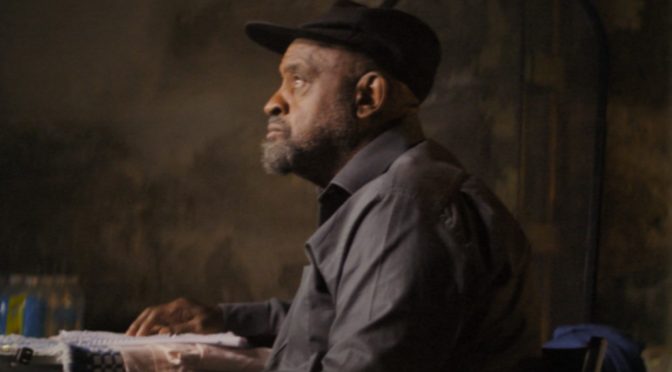 SCARED OF REVOLUTION, an intimate portrait of The Last Poets’ Umar Bin Hassan’s life, does not shy away from exploring the inner self. The documentary is a detailed discovery of Umar’s past, both personally and culturally, where his vulnerabilities are laid out through a number of insightful interviews with friends, family members, and fellow artists. In a poetic journey of America, we move from mid-west Ohio to Harlem to Baltimore, mapping Umar’s physical and emotional journey through childhood, drug addiction, performance, and fatherhood, in an attempt to discover his true self.

Umar Bin Hassan’s life did not begin easily. Born Jerome Huling in Akron, Ohio during a time of racial divide, his childhood was full of poverty and deprivation. Umar made money for his family by shining shoes, making up small poems to attract customers. The family’s relationship with Umar’s father was strained. His father, an alcoholic, was emotionally absent and would take the money Umar earned to spend on drink. Growing older, Umar left to find stardom in New York, where, in 1969, he joined The Last Poets, and created his most famous work Niggers Are Scared of Revolution. Umar’s demons were not restricted to state lines, however, and he developed a crack cocaine addiction while in New York. His addiction has impacted his life both personally and physically, and the film depicts him struggling to walk and the strains addiction has had on his family.

Umar’s personal life is the focus of SCARED OF REVOLUTION. His own vulnerabilities are depicted to the viewer, reaching into past memories to highlight a turbulent childhood and the subsequent issues he has faced as an adult. Family life is a central theme throughout the film. Umar’s own struggles with fatherhood are laid bare in an interview with his daughter. The ending of SCARED OF REVOLUTION is reconciling; in becoming a grandfather, Umar has found some peace and a second chance at family life.

The documentary’s storyline unfolds in an organic way, offering a unique perspective of the African-American civil rights and black nationalism movements. The documentary might tell the story of one man but it depicts the shared experience of many African Americans during the period. SCARED OF REVOLUTION is a unique insight into the recent past, and succeeds by not over-dramatising this significant period of history.

SCARED OF REVOLUTION is peppered with poetry and performance. While this could risk detracting from the authenticity of the documentary by making it feel less realistic, poetry recitals instead allow for natural moments of pause and reflection. Poetic performances are reminiscent of African oral storytelling tradition and delve into Umar’s soul and his search for self. Such performances give a viewer more insight into the emotional, personal and racial struggles he has faced than any piece to the camera could. Umar’s poetry recitals are hypnotic, and his talent as an oral poet is captured well in Daniel Krikke’s film. Time melts away in SCARED OF REVOLUTION, and through personal story and the rhythm of poetry there is a strong evocation of time and place.

While SCARED OF REVOLUTION is not a detailed history of The Last Poets, its ability to capture the history of an individual is much more insightful. While we are given a snapshot of the group’s influence on culture early on, The Last Poets are certainly not the focus of this film. While this could be seen as a negative, the documentary is successful in its aims – it creates a strong sense of time, place and history by telling the story of one man through his art. While not always an easy watch, the documentary is nonetheless an important one. SCARED OF REVOLUTION depicts the discovery of self, and in this, the (still on-going) fight for equality.