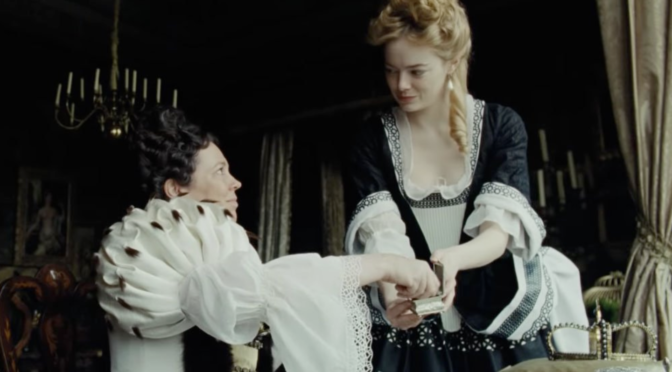 Yorgos Lanthimos’ keenly awaited new film THE FAVOURITE, though a departure from his usual, deadpan style, is no less comic or disturbing. Following the social and sexual rivalry between two early 18th century women clawing for the affections of an ailing Queen Anne, this is a bunny-eyed surrealistic vision of lesbian ladies in waiting, laconic lords, and lavishly ignored lactose intolerances.

Though Lanthimos’ latest is enjoyable to watch and brilliantly acted, he and his remarkable cast succeed in ensuring there’s not a single likeable character in this marvellously irreverent (read inaccurate) historical romp through the bedchambers and back-alleys of Queen Anne’s palace. The Queen herself (Olivia Colman) is troubled, tired and more than a little spoilt – an attribute which can perhaps be forgiven when we find that the beloved harem of 17 rabbits with which she surrounds herself is in fact a monument to the 17 children she has lost. Meanwhile, her dearest friend, lover, and court advisor, Sarah Churchill (Rachel Weisz) presents a painfully honest, trouser-clad complexity of emancipation and insecurity. Sarah’s cousin, Abigail (Emma Stone), a former lady fallen (literally) on her knees in the mud, undergoes a transformation from utter sweetness to quiet violence, power-hungry and iced in fondant fantasy.

The men are equally difficult to warm to, either flamboyantly wigged and ingratiating, sulkily mean, or worse, simply bland. Refreshingly, the female body is more important here, whether gout-struck royalty engaged in frustrated hobbling along empty corridors, angry at courtesans who can still dance, or the pleasures and pains these women give to one another. History is, for once, a female affair. The men, on the other hand, prance in gingerbread curls, chalk and lipstick, throwing oranges at a bouncing jolly court clown covering his balls.

When worn, however, the costumes which clothe these various examples of villain are superb, having been released at the director’s instruction from fixation on historical accuracy, instead referring to 19th century drama Cries and Whispers by Swedish auteur Ingmar Bergman. Disregarding the vibrant colour palette and exquisite fabrics typical of noble attire of the early 1700s, the wardrobe is predominantly monochrome, with courtesans flourished in laser-cut vinyl instead of lace, and chambermaids outfitted in reclaimed denim from thrift-shop jeans. A medley of truth and lies, function and frivolity, the very dresses worn reflect the genius of THE FAVOURITE’s particular presentation of History, one which is fictionalised, feminised and though at times frightening, fearlessly fun.

2 thoughts on “The Favourite”