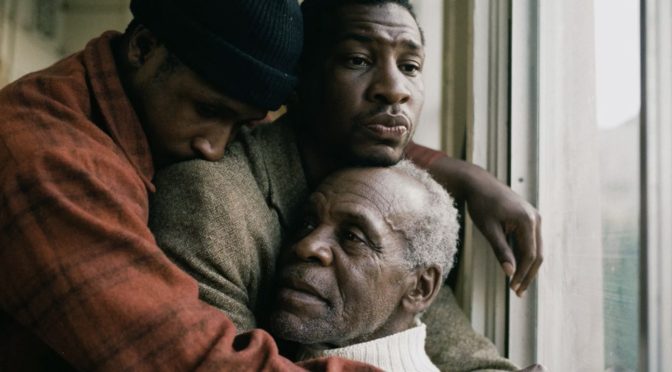 If you leave your heart in San Francisco, then what happens if the heart of the city itself is picked apart? Joe Talbot’s debut feature is fantastically accomplished on a technical level and blessed with some excellent performances. However, it is the soul of the film that will stay with you, brewing ideas of belonging, community, and personal identity. More specifically, it addresses the fragile role locations play in those ideas and the emotional gaps left when the character of the places change beyond our recognition.

Jimmie Fails plays a semi-fictionalised version of himself, journeying from his neighbourhood (contaminated by industrial waste and generally neglected) to the house his grandfather built in central San Francisco. He repaints it and maintains it despite the protestations of the current occupants, an elderly white couple. The neighbourhood is populated by yuppies generally, and Segway tours roll past spouting tourist claptrap about the architecture. Jimmie stays with his best friend Monty (Jonathan Majors), who works in a fishmonger while he strains to write a play. Through a series of minor plot turns, Jimmie and Monty come to live in the house and the film charts their assertion over the space, despite tricksy realtors, aggressively abusive peers and neighbours both old and new, and Jimmie’s complicated relationship with his father.

At the core of THE LAST BLACK MAN IN SAN FRANCISCO is the belief that some of the major political topics of our time – gentrification, domestic transience, the breakdown of community – are the issues that actual people face, and they are not merely abstract talking points. Around that core, there are a tightly wound and densely packed set of issues, but what they all have in common is they are expressed through the characters brought to life by this script.

Jimmie and Monty seem adrift in time and place. The film itself plays out in a rather poetic and timeless version of – nevertheless modern – San Francisco. The modern tech bubble is referenced, but it’s hard to recall an explicit engagement with specific influence on the character of the city. What Jimmie seeks in the house is the intersecting axes of his existence – emotional, physical, spiritual – to find his own personal origin point. Monty, with his soft and measured speech, seems at odds with his neighbours and peers. His attempts to imitate their speech in the mirror emphasise the lack of belonging he feels. However, in discussing an ill-fated member of the group later in the film, his exclamation that “people aren’t one thing” hits with force. At every turn, the forces of change either sweep people aside or look to fit them neatly into boxes or apply labels, to the point that Jimmie himself starts to do it. Even the house around which the plot revolves stands apart from the rest, a metaphorical representation of the people it once homed standing apart from the supposed progress around them.

The film would be an achievement in terms of character and theme alone, but Talbot shows an awareness for imagery that elevates the script even further (co-written with Rob Richert, and co-conceived with Fails). Monty framed at the edge of the desolate boardwalk, alone and isolated in the frame hammers home his emotional state at the time. When Jimmie schools the Segway-riding idiots on the history of the house, he is framed from below – a powerful moment, confident but humble in his superior knowledge of his home and love of the city. When he later chastises some dismissive imported locals, carping about the city on a bus, we understand why it feels like a personal attack on him.

THE LAST BLACK MAN IN SAN FRANCISCO tells a clearly personal and localised story but individual viewers can take different things to ruminate upon after Talbot’s film. The manner in which it gently and lyrically blends that story with ideas of home, belonging, and internalised personal history transcends the boundaries of San Francisco or the Bay Area.