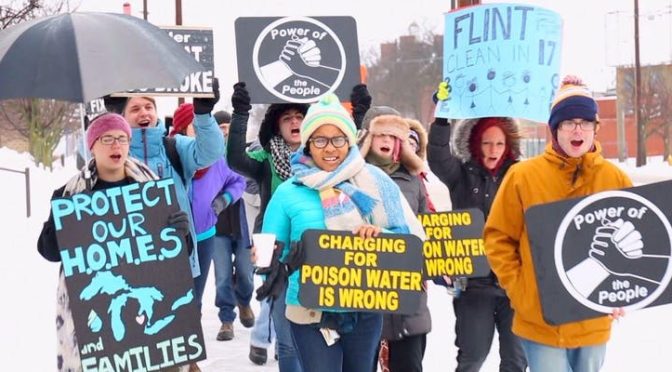 America. The land of the free and home of the brave, where every citizen ostensibly has the unalienable right to life, liberty and the pursuit of happiness. The reality is less romantic than that, however, as it can often feel as though the life and happiness of certain people are branded with a far lower value than that of the almighty dollar. Several such occurrences are highlighted in THIRST FOR JUSTICE, as it explores the devastating fallout felt by communities whose water supplies have been contaminated, and how deferred culpability and plausible deniability have kept any of those responsible from being held to account.

Investigative journalist and director of the film Leana Hosea, journeys across America to locations where that most precious of resources, clean drinking water, is not being treated as a basic human right to ask a question. Is it a crime to have known that the water was contaminated and that people were losing their hair and getting ill? The answer, she soon discovers, is not really yes, as she visits with sufferers from uranium poisoning in the Navajo Nation and lead poisoning in Flint, Michigan, as well as oil pipeline protestors at the Standing Rock Reservation and Great Lakes, Michigan, examining the sociological and political factors that led to these health crises.

Having worked as a BBC journalist for 13 years, and fresh from another recent hard-hitting documentary, RHINO WARS, Hosea is no stranger to emotionally charged topics. Interviewing residents across US communities and locations – Navajo Nation; Sanders, Arizona; Flint, Michigan – who have been exposed to contaminated water, she presents their stories with sensitivity and dignity, while still highlighting the direness of their plight. It is here that THIRST FOR JUSTICE finds its most affecting material, as it pans between those who have already lost loved ones to the contaminated water, to those who are still fighting, to those who fear for their children’s lives, all desperate for things to get better, all angry that nothing has changed.

This spirit of resistance is at the heart of the film, and serves as a much needed silver lining around the bleak cloud of angry, toxic rainwater. Whether it’s rallies outside the Flint town hall, or demonstrations at the Standing Rock Reservation, the message they send is clear – “we’re not gonna take it”. Unfortunately, the message isn’t met well, with the Standing Rock protestors being met with tear gas, water cannons and rubber bullets, and others getting wrapped up in red tape, denials, and smug indifference. By following the arduous attempts to see justice, Hosea effectively portrays the difficulty faced when trying to prove fault for these contaminated water supplies, and highlights the worrying ease with which the US constitution can be circumvented when it comes to placing importance on profits above human lives.

Though there is no real resolution to appalling issues raised in the film – for the most part it just sways between the mournful and uplifting, helped along by a basic but serviceable score from Anthony Bruno – THIRST FOR JUSTICE manages to end on a hopeful note, embodied by the strength and willpower shown in the ranks of protestors who refuse to let this status quo be normalised. Phyllis, a Lakota elder, sums it up best when she says of her people’s resolve, “we are the buffalo nation; we are the ones who ride into the storm”.

Terrifying experience of reporting from an abandoned uranium mine in Arizona, USA, where radioactive material lies in the open, uncontained – polluting air, water, and the food people eat. From my documentary Thirst for Justice #thirstforjustice #nuclear #pollutedwater pic.twitter.com/IKhpnsXms5

One thought on “Thirst for Justice”