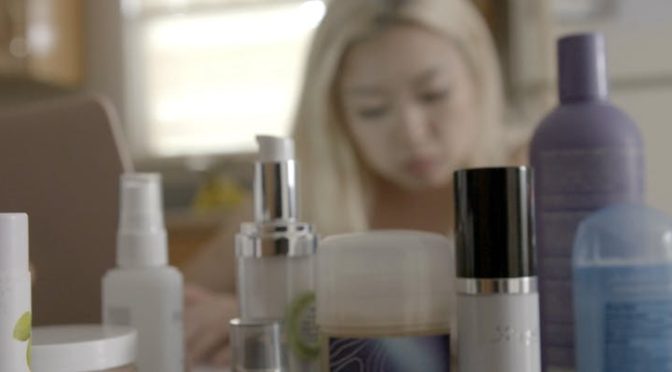 What is the price of beauty? There’s the literal money spent buying the products, of course, and the time and effort spent applying them, but what about beyond that? What costs may lie hidden in the chemical makeup of makeup, when the industry isn’t required to prove that an ingredient is safe for humans before it hits the shelves? TOXIC BEAUTY follows a group of women who discovered the answers to these questions in the worst way possible, and along the way, uncovers a terrifying pollution crisis that has been hiding in plain sight for decades.

In the early minutes of the film, some old footage of a woman addressing an auditorium of young girls is shown. She lauds the importance of makeup and personal care products, saying that “the way we look exerts so much influence on the way we feel, and on the way others feel about us … As a French chef might say: it’s the little touch of seasoning that makes a dish just right.” This may well be true of food, but as TOXIC BEAUTY strives to show, the analogy falls a little flat when applied to the cosmetics industry. A more accurate comparison would be one where the chef fails to ensure the safety of the seasonings he uses, and then refuses to warn diners when it becomes apparent that he is putting known carcinogens in most dishes.

Such are the circumstances that surround the class action lawsuit against Johnson & Johnson at the centre of the film. The plaintiffs are a myriad of women from all different walks of life, as different as a group of people can be, but connected by two unifying factors: a diagnosis of ovarian cancer, and a history of using J&J’s baby powder. While each of the individual stories are unique and devastating (Jacqueline Fox, Mary Krpan, and Mel Lika sting in particular when it is later revealed that they have died since their interviews), one of them, Deane Berg, is positioned at the centre of the lawsuit, due to the strength of her argument that using baby powder caused her ovarian cancer.

With testimonies from both Berg and her lawyer, Allen Smith, the film quickly becomes an alarming exposé of J&J, detailing the ways in which they have wielded their corporate power to cover themselves in cases such as these: conducting secret meetings with the FDA to convince them not to enforce regulations on talc, despite knowing since the 1960s that it was harmful, and offering Berg first $800,000, and then $1.3 million in damages to keep quiet, which she declined because they still wouldn’t agree to put a warning label on talc.

The sinister flames are further fanned by Robert Carli’s subtly disquieting score, and some deviously placed vintage makeup adverts which have not only aged terribly but in this context may be the only time when someone applying lipstick or sprinkling talcum powder feels as unsettling as watching a horror film. Director Phyllis Ellis leans on the juxtaposition between the image of care products pushed by the manufacturers and the harsh reality being revealed by the plaintiffs and scientists, conjuring an incredible atmosphere of conspiracy and malicious intent throughout, and making the case against J&J feel undeniably compelling.

Looking to the cosmetics industry at large, TOXIC BEAUTY also follows 24-year-old Mymy Nguyen, a medical student who, after discovering a benign tumour on her breast, conducts an experiment to see how her daily routine of personal care products produce endocrine-disrupting toxins called phthalates in her body. While this intercut structure does leave the film feeling a little disjointed, Mymy’s experiment – not to mention the results of it showing her levels rate much higher than the 95th percentile of Americans – illuminates the ways in which simple things that are presumed safe, such as deodorant and perfume, are dangerously unregulated, and can lead to major health problems.

With intermittent examinations of other instances of health issues arising as a result of exposure to personal care products, such as nail salon workers seeing an increase in miscarriages, the film can start to feel a little unfocused, especially when it returns to the main narrative of the J&J lawsuit. This is forgivable, however, as the portrait painted here is one of a national emergency that has too long been flying under the radar, and one that is affecting too many groups of people to fit easily into the 90-minute run time. Though some of the blending could be neater, TOXIC BEAUTY succeeds as a harrowing and enraging examination of one of the biggest scandals in cosmetics history, wiping away the façade of glossy adverts and photoshopped models, to reveal the ugliness lurking beneath the surface.