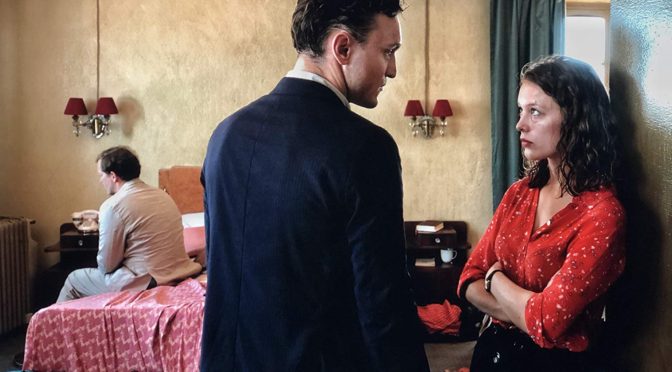 The city of Paris is being occupied, ‘the fascists’ are at the gates, and jackbooted enforcers are demanding papers. Seemingly plucked from the middle of the twentieth century, Georg escapes their attention by running down side streets parked solid with modern cars and advertising hoardings.

Later, awaiting passage to Mexico on a modern cruise liner using a stolen Deutsche Reich passport, he forms a bond with a young refugee in Marseille. The young boy reclines on a pillow adorned with Olympique de Marseille’s Stade Velodrome, as it looked after renovations for the 1998 World Cup. These temporal disconnects and foregrounded anachronisms have a disorienting effect in TRANSIT, but Christian Petzold’s delicate weaving of these elements forms a powerful tapestry depicting the plight of the displaced and persecuted within the cycle of history.

We follow Franz Rogowski as Georg, a man in Paris tasked with delivering a letter to a German writer as occupying fascist forces close in on the city. When he tries to hand it over, only to find the writer dead, he assumes the man’s identity – to get around his own ‘illegal’ status – using it to secure his passage to Mexico, via Spain and the USA. Upon arriving in Marseille, Georg forms a connection with a young North African boy and his mother before falling in love with the dead writer’s wife, who is searching for her husband in the mistaken belief he is still alive.

“When examining Europe’s collapse into fascism in the 1930s it is very easy to compartmentalise it and view it at a distance, from our ivory tower of supposed 21st-century progress. The manner in which TRANSIT brings us crashing back to earth is uncomfortable and bewildering.”

The manner in which various human beings traverse this world (or do not, as the case may be) develops into something resembling CASABLANCA within Dante’s first circle of Hell. The characters, covering all manner of ages and races, all seem inexplicably trapped, with a threat of fascist raids hanging over them. Anyone who attempts to escape is inevitably foiled or meets an unfortunate end. Georg even tells the story of a man trapped in limbo to the dumbstruck US Consul in Marseille.

The lack of clarity in TRANSIT’s temporal setting is clear from the beginning: Georg himself and several other characters have clothing that appears mid-century. The disorientation is further amplified by the story being an adaptation of a novel set in 1942. However, the protagonist interacts with people with a far more modern appearance, in an urban environment that is obviously contemporary.

In evoking the World War II period, yet uncoupling the story from a specific era in this very disconcerting way, Petzold’s adaptation of the 1944 Anne Segher novel transcends the period nature of such stories. When examining Europe’s collapse into fascism in the 1930s it is very easy to compartmentalise it and view it at a distance, from our ivory tower of supposed 21st-century progress. The manner in which TRANSIT brings us crashing back to earth is uncomfortable and bewildering. The parallels to the present-day are jarring but resemble a half-remembered version of European history.

Travel, limbo and stalled progress are recurring themes throughout the film. The refugees and ‘illegals’ in the film are unable to move forward and are pursued by cold and antagonistic authorities. TRANSIT shows this, but also presents the darker shadows of history. Humankind itself is stalled and in limbo. While we stand still, the echoes of the past grow louder until we can hear them loud and clear right next to us.

One thought on “Transit”