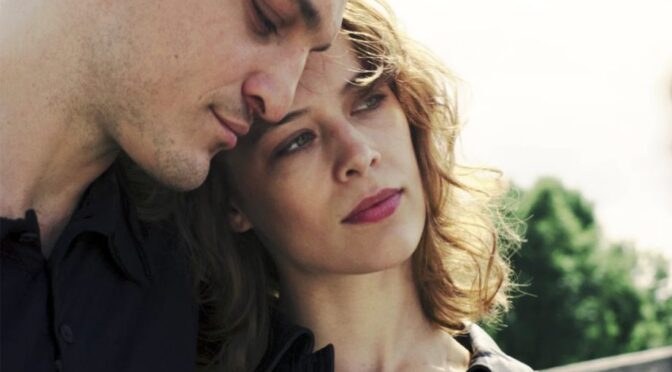 UNDINE is an evocative mythological tale exploring the romance between a human and creature of the sea. Christian Petzold has been carving his name into the industry for years, with mainstream audiences beginning to garner more interest and his latest is anticipated to make waves. His distinct style of filmmaking is intense and observational, driven by the characters’ behaviours, and unafraid of being deliberately mysterious.

This peculiar and enticing story follows the precarious romance of Undine (Paula Beer) and Christoph (Franz Rogowski). Their meet-cute is in a restaurant; Undine follows a deep voice calling her from inside a fish tank, Christoph calls out behind her, and the pair’s meeting is baptised by the small aquarium tipping and smashing into them. Their eyes connect as dying fish flop around them, and he tenderly pulls out bloody shards of glass from her chest while the waiter flusters around muttering about insurance. Right from its inception, there’s unexpected humour in this tale.

Petzold’s work explores stories and romance across the ages, from the setting of World War II in PHOENIX to TRANSIT (his film about a political refugee). These period pieces lay the foundations of his work in historical stories, underpinned by his teachings from scholars at the Berlin School. UNDINE successfully blends the urban architecture of the city, with the murky swamplands of the outer-lakes, presenting the illusion of supernatural landscapes against the backdrop of the real world. Petzold demonstrates an interest in Berlin’s developing landscape, walking both the audience and tourists through this labyrinth of time, highlighting to us human relationships with stories and the past. Undine works as a historian for the Senate, and during her talks around the model city, she highlights buildings that date back to the 1900s and acknowledges the silhouettes of housing yet to be constructed. Christoph is employed as an industrial diver, and physically works with decaying structures and moss-coated pipes; the hidden and aged framework of the outer-city. Modern scuba diving has allowed us to enter the watery depths, and uncover the secrets of the sea, and explore the fables told by our ancestors. The myths of the Undine water nymph were birthed during the German Renaissance, and this elegant imagery weaves itself in and out of the film. Their unique jobs are symbolic of each other, as Petzold focuses his contemporary lens on ancient stories.

When navigating this road from past to present, the film possesses a certain degree of duality; framing places and people we see in the same spaces at different times. While people move on and landscapes erode and change, the memory of someone’s presence remains. The same applies to the psychology of the story. Undine repeats her talk for work in different scenes, with the words heard by different people each time: the passing on of a legacy. Petzold revisits the table café, where Undine splits from her first boyfriend Johannes, agrees to meet with him there later in the film, and then is finally visited by Christian searching for Undine. The use of reflection and return mirrors the way our brains try to differentiate between reality and illusion. We understand Undine as potentially being this nymph creature, and the idea of her being his fantasy, but her emotional infatuation with Christian reframes him as being her dream instead.