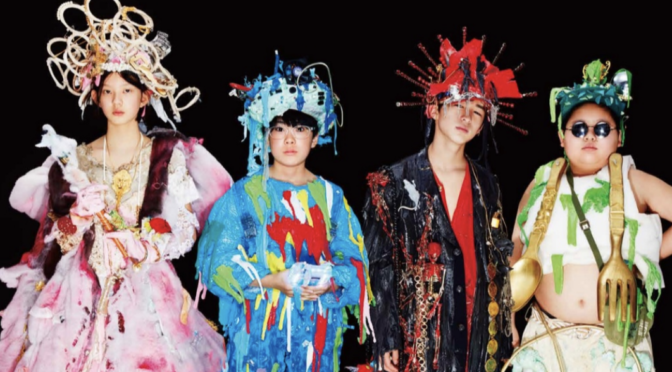 Premiering at Sundance, Mikato Nagahisa’s debut feature WE ARE LITTLE ZOMBIES follows four Japanese orphans, who have just lost their parents and met at the crematorium, as they eclectically try to find their ability to feel once more. Taking in various scenarios, chiefly their attempts to form a rock band, the fast paced and video-game-influenced production is often touching and well-performed, if a little hard to engage with or decipher beneath the heavy layers of artifice.

Nagahisa won the Sundance short film award in 2017 with AND SO WE PUT GOLDFISH IN THE POOL, and his feature debut maintains the same kinetic style of the short, and continues to focus on young people who are difficult to understand, Nagahisa seeking to be our guide. The film is laced with the imagery of videogames, from the pixelated animations that guide us into the film after a prologue to the soundtrack that will easily evoke memories from anyone who has ever played 8-bit or 16-bit games.

The film – as endearingly eclectic as it is – covers a lot of narrative ground, albeit not in a terribly controlled fashion. Each child’s backstory is introduced amidst a flurry of nihilistic-sounding quotes. The child actors do come across well in these segments, their emotionless combining with their immaturity to produce a sort of unfledged stoicism. In an attempt to break away from this emotionless existence, they form a rock band and the musical segments initially feel a bit forced and lacking, but the main refrain of the title track – a sort of Sega Mega Drive soundtrack meets The Go! Team type mash up – does seem to stick in your head.

The film is edited in blur, with frequent surreal interludes. A massive goldfish going by the window is presumably a nod to Nagahisa’s previous short, but the film itself is a far more colourful affair than either AND SO WE PUT GOLDFISH IN THE POOL or that short’s main influence, Hideaki Anno’s LOVE & POP. The frenetic style is hard to connect with, but then the children themselves find it hard to connect to the emotion of their situations, either the loss of their parents or – for some of them – the shittier aspects of their lives. Instead, they escape into a fantasy of bright colours, video game noises and characters, and upbeat music.

It will be quite obvious up front if you can get into the frame of mind WE ARE LITTLE ZOMBIES requires to get the most out of it. Once deep into the film, the numerous sidetracks start to make it feel like less would have been more. Having said all that, if you meet the film on its own terms then you will be given a colourful and energetic shot of adrenaline as you try to join this quartet in trying to quicken their pulses.