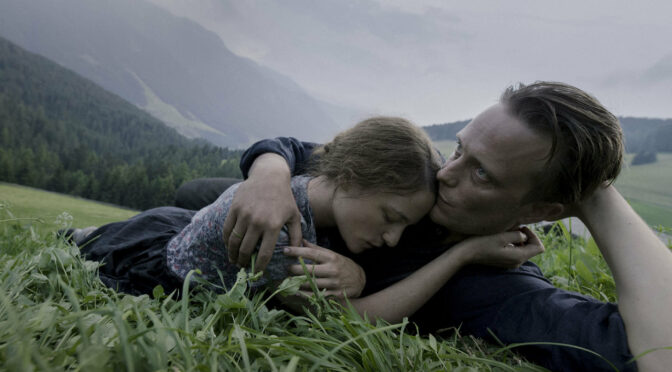 In the Austrian village of St. Radegund, Franz (August Diehl) and Fani (Valerie Pachner) Jӓgerstӓtter live in harmony with the land, their agrarian community, their children, and each other. They love — yes, that’s right, eye-rollers, love — and are loved in return. Jörg Widmer’s cinematography at first captures this happy state with sprightly mobility, the dollies replenishing in their rush and the wide-angle lens a means of seeing the world extended vibrantly, as if everything is new and always will be. But that same trick of the lens constantly tips the scale of Malick’s images, so that, even as Fani is framed extending the full height of the screen in one moment, she’s still but a speck when seen in relation to a mountain. One image to sing about: Franz and Fani lying in a field, wrapped up and secure in each other’s embrace, covering the length of the widescreen frame. But the clouds are dark.

A HIDDEN LIFE begins in 1939 and ends in 1943, during which time Franz makes no secret of his distaste for Nazism. He refuses to engage in its rhetoric or help fund its operations; endures the consequences (as do his family), is spurned by the people of his home, some of whom tolerate the encroaching signs of fascism; he chooses not to swear the oath to Hitler, and is arrested for failing to do so; suffers the separation intimately in a series of prisons, withstands constant terrorising and violence and mental anguish; and finally, when he deems every alternative proffered to him as unacceptable, is executed.

But this summary doesn’t express half as much as one of Franz’s or Fani’s voice-overs, whether addressed to each other as letters, expressed as extempore expostulations, or, most embarrassingly for some viewers, conveyed in prayer. The voiceovers in Malick’s films are a contentious feature of them, existing as they do at the intersection of dramatic monologue, epistolary form, poetic invocation, philosophical/theological rumination, and prayer itself. One utterance seems key: when Franz relinquishes his instinct for survival, he claims, “a new light floods in.” He gains from agony and privation a fuller understanding of the world and his place in it, he masters how to forgive, and, without company in the cold prison cells to which he’s confined, he roams his memories of Radegund, Fani, and their family: never closer, even if so far away.

Let’s make one thing clear at this juncture: A HIDDEN LIFE is not a Christ allegory. The film gains its meaning’s strongest reassurance if Franz is a person (a real person) inspired by Christ’s example, rather than simply a stand-in for the son of God himself. In the words of a sage and sympathetic church painter: “Christ’s life is a command.” It’s a command Franz internalises, trusts in, and draws strength from.

Franz’s position is a deontological one, it’s fixed in observing an unbending duty: he will not swear allegiance to people he cannot. The barrage of argumentation launched against him is of the expedient sort, the sort launched against Father Rodrigues in Martin Scorsese’s SILENCE, a film A HIDDEN LIFE shares more than a fibre with. Various guards, religious figures (the film’s critique of the Catholic Church’s complacency with regard to the rise of Nazism is notable), judges and other members of the Nazi machine browbeat Franz with promises of safety, exemption for him and his family, if only he will cease his steadfast opposition. He’s told, over and over again, that his sacrifice is without meaning, that no one will hear of him. Fascism in the film is a fidgety beast. It’s anxious: if it does not inspire total obedience, it’s as if it inspires none.

“The only thing simple about Franz is the language with which he articulates his internal life: the substance of that life, and the moral and religious fortitude governing it, is enormous.”

This is why it’s profoundly patronising to say, as some have, that A HIDDEN LIFE is a film about ‘simple goodness’ propagating itself. This statement couldn’t be running away faster from the truth if it tried. The only thing simple about Franz is the language with which he articulates his internal life: the substance of that life, and the moral and religious fortitude governing it, is enormous. What could be more complicated, more wrenching, than knowing the decision he makes with the best intentions in the world will make his wife a widow, leave his mother without a son, and ensure a future in which his children won’t grow up with him by their side?

There’s a way of reading Malick’s films as representations (or perhaps constructions) of Eden. Someone could only come to this conclusion by ignoring a good portion of the material world in the director’s cinema, which, for all its religious movements, is one of the earth and the air. It would flatten the colonial context of THE NEW WORLD to think in these terms; strip from THE TREE OF LIFE the powers of its grief. The point of Malick’s proclamation — which can also be heard and seen and felt in A HIDDEN LIFE — in THE THIN RED LINE of “all things shining” has to be hung in pendant with the fact of nature’s indifference to humankind, indifference in the face of those who destroy, cultivate, or cherish the world in which they live. This is cinema, in part, about the impossibility of Eden.

“There’s a way of reading Malick’s films as representations (or perhaps constructions) of Eden. Someone could only come to this conclusion by ignoring a good portion of the material world in the director’s cinema, which, for all its religious movements, is one of the earth and the air. […] This is cinema, in part, about the impossibility of Eden.”

The music, whether in Malick’s employment of his beloved classical surges or the workings of the score by James Newton Howard, intensifies the affective qualities in the filmmaker’s imagery, sometimes too much. The entire soundscape, musical and diegetic — rolling thunder and singing birds and falling water and bleating animals — is outsized, and contrives to make these already hidden lives all the more concealed. That’s fine when the performances are pitched as exactly as these: Diehl and Pachner literalise Malick’s cognitions in a thousand actions of affection, defiance, determination, and in the end, wrenching acceptance — although the director’s films are possibly defined, at least nowadays, as devoted to montage, it’s worth remembering Malick’s is an actor’s cinema also. The only mightily miscalibrated feature of the film is its use of English and German, the latter exercised only in the case of background noise, inessential speech, or whenever Nazi-affiliated characters burble and spurt hatred: the scheme is inconsistent, and after a while, somewhat wearying.

But A HIDDEN LIFE continues a consistent balancing act of Malick’s filmography: making films that combine — sometimes in a single line of dialogue, soundtrack cue, camera movement, composition, or actorly gesture — the grand and the banal. It’s there from the earliest films and it’s there in the most recent: it’s in BADLANDS, in the way the sharpness of Kit’s murder-spree is juxtaposed with both his and Holly’s platitudes and oddities of speech; it’s in the dialectic between the open, luscious landscapes and the sealed-in, subjective quality of Linda Manz’s voice-over in DAYS OF HEAVEN. It’s in THE TREE OF LIFE (what isn’t in THE TREE OF LIFE?); it’s certainly in the one-moment-exasperating, next-moment-astonishing cinematic contortions of TO THE WONDER and KNIGHT OF CUPS; but most of all it’s prominent in every sound and image of Malick’s undervalued masterpiece SONG TO SONG. A HIDDEN LIFE’s obsession with the performance of feeling wouldn’t be as obliteratingly affecting if not for these films. So for all the exclamations that this latest picture marks ‘Terrence Malick’s return to form,’ or, more grossly, that ‘Terry’s back!’ I counter with this: he never left.