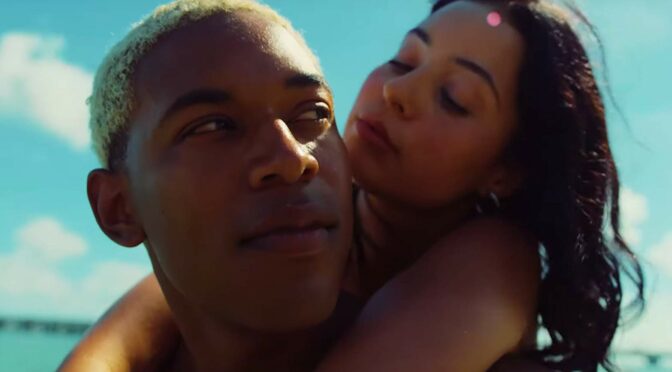 WAVES is a film of two halves in just about every sense. The film has a split narrative, and even within those narratives there are clear turning points. The characters are important but easily sidelined as the film progresses. The camerawork is balletic but lacks focus. The script is emotional but prosaic. The acting is stellar but struggles with the material. On the surface, WAVES is a moving portrait of a spiralling life, with an engaging ebb and flow. However, below the churning surface the waters are murky and the storytelling objectives hard to see.

Kelvin Harrison Jr leads the initial segment of the film as Tyler, a high-school student and promising scholastic wrestler from a middle-class African-American family in South Florida. As the film opens, the camera twirls in his car (repeated later in the film, this visual stunt has flair but little poetry) to show the enjoyable life he is living and his connection with his girlfriend, Alexis (Alexa Demie). However, an injury and overbearing father (Sterling K. Brown) put a strain on him and his relationships, and his promising existence starts to unravel. Observing, and taking more of a lead later in the film, is his sister Emily (Taylor Russell). The backbone of the film’s latter story is by her developing relationship with Luke (Lucas Hedges), her family, and her brother’s issues.

On a visual level, Trey Edward Shults has created a vibrant film. In particular, recurring use of blue and red light sets tone without dialogue and also creates an attractive contrast. His use of the camera feels like it is interrogating the spaces in which we find our characters, and a shifting aspect ratio works well to shift focus and tone. In terms of visual storytelling, Shults has obvious creative reserves to draw upon, and they will be obvious to most watching the film. Where the project goes a little awry is in both the story being told – the script – and how this tale interacts with this mode of storytelling.

That the story of WAVES – centred on an African-American family – is written by a white man (Shults) needn’t be an issue in and of itself. THE LAST BLACK MAN IN SAN FRANCISCO recently showed that, with collaborative engagement, this could – theoretically, at least – work. However, the direction the story takes is an issue when it does little to engage meaningfully with the fact the central family are African-American. The story of Tyler feels completely adrift from his racial identity. This isn’t to say a story about the tragically spiralling life of a young black man needs to be intrinsically linked to his race, but WAVES clearly wishes to do just that. Sterling K. Brown’s Ronald is at pains to express that he and his son are “not afforded the luxury of being average” and Shults’s camera pans towards police presence when Tyler’s unravelling accelerates. The end result is a film which (perhaps unintentionally) ends up attributing Tyler’s decisions to his racial identity, because there is no meaningful engagement with differing aspects to his experience in the environment around him or outside his own actions.

The film fares slightly better when focusing on Taylor Russell as Emily, Tyler’s sister. Her story is one much more at home in dealing with ideas of forgiveness and reconciling your love for someone with the hate you hold for their actions. Given the length of WAVES at 135 minutes, Emily’s own story is a compelling but less fraught tale that would stand apart. One of breaking cycles of hate, of the strength gained from being seen outside a definition of yourself crafted from actions that are not your own. It is during this segment that Sterling K. Brown is also given better material to work with. This segment of the story is less amped-up and more circumspect, but is better for it. Even during this segment, Lucas Hedges’s character skirts close to the ‘white saviour’ trope and it is only through maintained agency for the Emily character that it doesn’t fully embrace it.

Throughout the film, it is hard to fault the acting of the key players – in particular Harrison Jr (also making an impact with LUCE recently) and Russell as the siblings. Pain, confusion, inhibition and regret come through gently but clearly in the faces of the cast. The story they are acting out, however, has little to say beyond the spiralling anguish.

WAVES is a film shot and choreographed with style. However, its attempts to also add depth fail and result in a transparent surface layer of appropriated trauma. Although frequently visually stunning, a failure to portray a meaningful source of the drama means the film’s impact doesn’t last, and what does persist feels increasingly hollow.